Every four years Canterlot High and its rival school, Crystal Prep Academy, come together for The Friendship Games, a competition meant to foster a sense of unity. 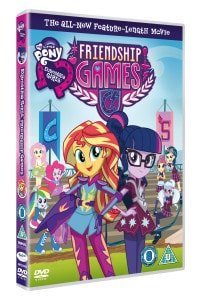 In a strange twist, the Twilight Sparkle from this human world is actually a pupil at rival high school Crystal Prep with a keen interest in the magical energy emanating from Canterlot High. Unfortunately, Twilight accidentally closes the portal to Equestria and unwittingly starts to steal the Equestria Girls’ magic. As the Canterlot High team faces off against the competitors from Crystal Prep, and their win-at-all-costs principal Abacus Cinch, Sunset and the others must stop Twilight from continuing to drain the Equestria Girls of their magic and figure out a way to restore the portal.

Before the Capture the Flag event can even begin, Cinch convinces Twilight to release all the magic she’s stolen onto herself to ensure Crystal Prep’s victory. In an epic showdown, Sunset and her friends face the ultimate foe, a magically charged Twilight Sparkle bent on tearing down the magical barrier between their world and Equestria!

Get on your marks and get set as My Little Pony: Equestria Girls – Friendship Games races on to digital download and DVD on 2nd November just in time for Christmas!

Why not bring the Equestria Girls to live with these fabulous printable colouring sheets, simply click on the image and press print.

To celebrate the release of My Little Pony: Equestria Girls – Friendship Games on digital download and DVD, Boo Roo and Tigger Too are lucky enough to have one DVD of the new adventures to giveaway.

To enter simply leave a comment telling me who your favourite Equestria Girls character is, then complete the Gleam widget below:

The Polar Bear Who Saved Christmas 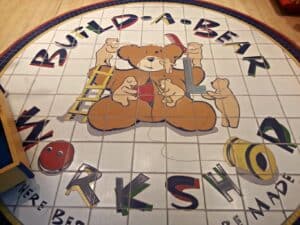 This website uses cookies to improve your experience while you navigate through the website. Out of these, the cookies that are categorized as necessary are stored on your browser as they are essential for the working of basic functionalities of the website. We also use third-party cookies that help us analyze and understand how you use this website. These cookies will be stored in your browser only with your consent. You also have the option to opt-out of these cookies. But opting out of some of these cookies may affect your browsing experience.
Necessary Always Enabled
Necessary cookies are absolutely essential for the website to function properly. These cookies ensure basic functionalities and security features of the website, anonymously.
Functional
Functional cookies help to perform certain functionalities like sharing the content of the website on social media platforms, collect feedbacks, and other third-party features.
Performance
Performance cookies are used to understand and analyze the key performance indexes of the website which helps in delivering a better user experience for the visitors.
Analytics
Analytical cookies are used to understand how visitors interact with the website. These cookies help provide information on metrics the number of visitors, bounce rate, traffic source, etc.
Advertisement
Advertisement cookies are used to provide visitors with relevant ads and marketing campaigns. These cookies track visitors across websites and collect information to provide customized ads.
Others
Other uncategorized cookies are those that are being analyzed and have not been classified into a category as yet.
SAVE & ACCEPT
51 shares