Last week Tigger’s nursery were holding their Christmas party and as it was a day that he did not usually attend  I said that I would take him in so that he wouldn’t miss out.

A letter was sent home at the beginning if November with the date of the party and that if we wished for Tigger to visit Santa then we would need to send in £1.50 to cover the cost of a present. I could not  believe the cheek but of course I didn’t want him to miss out so paid up. Then a week later another letter arrives, thank you for allowing your child to attend the Christmas party blah, blah. We are asking all parents to please bring in a item of food which must be shop bought and in the original wrapping so that we can read the ingredients to check for allergies. Unbelievable, first they ask for money for a present , now food, all they are providing in the hall!

I arrived a few minutes late and found everyone coming out of the hall and heading to wait outside the church. I overheard another mum say something about waiting for Santa to arrive. So there we stood in the cold waiting for Santa, many of the little ones had come outside with no coat on and must have been freezing. Lucky as we had just arrived I had taken our coats off so we weren’t so bad.

After a few minutes I could hear bells jingling and music playing but could not see anything, when suddenly Santa and sleigh arrived. The nursery had arranged for our local Lions Santa to come in his sleigh and hand out the presents. 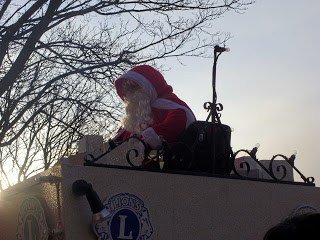 Once we were all back inside in the warm the party felt very disorganised. We were told that it would take a while for Santa to see all the children so we could help ourselves to food whilst we waited. They had unfortunately placed the food right next to Santa’s grotto so it was a little unclear as to which queue people were waiting in. Most people decided to choose food first so I thought I’d wait for Santa. After a few minutes of waiting we were able to go in. I sat Tigger down next to Santa and pulled back to get a photo, but as you can see Tigger was not impressed by Santa and wanted to get away. 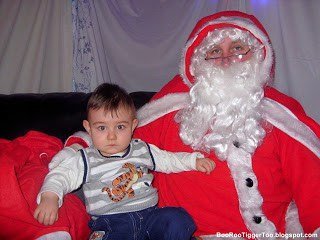 After having to pay £1.50 for his present I wondered what ‘tat’ he would end up with… To my delight I helped him open the present to find a beautiful Colours book by Priddy Books.
After Santa and his present I thought it was time to see what there was to eat. There was so much food that had been brought in but Tigger was only interested in the chocolate fingers and biscuits. 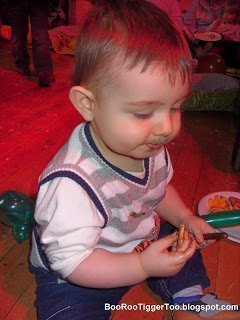 Tigger is really too young to understand and enjoy parties apart from the food. We did end up leaving early as after we had seen Santa and had some food there wasn’t really much else happening.
Christmas Priddy Books Tigger