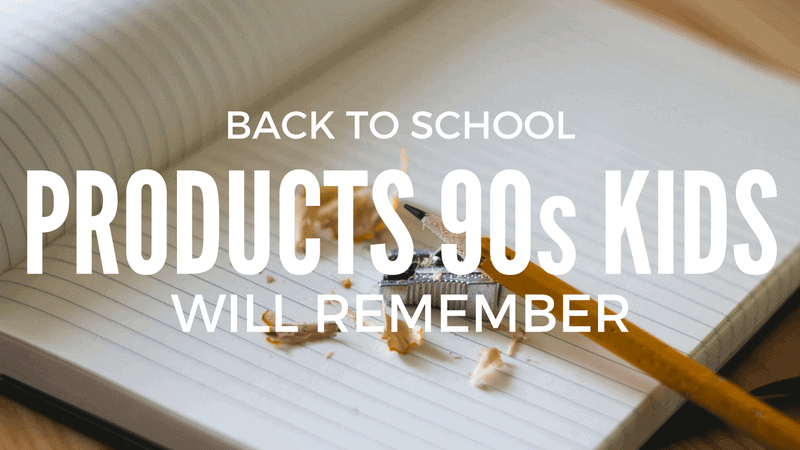 Everything seems so easy for kids these days – most of them carry smartphones and have access to computers to easily record, save and send schoolwork with no effort.

Here’s a throwback to the nineties and ten of the back to school items that defined the decade.

Before the age of smartphones, notebooks were a great way of writing crushes, doodling, ripping out pieces of paper for aeroplanes and other ballistics, and occasionally taking down the odd note or two.

They were perfect for covering in stinky stickers and pictures of your favourite cartoons and TV shows and etching in BFF promises with your best friend who you’d inevitably fall out with halfway through the term.

The first days of school were full of kids comparing back to school products, with the most important question being who had the coolest pencil case. They also worked as a great way of showing off your favourite cartoon of the time.

The tube ones were often the winners – the ones which were shaped and branded like cans of Pepsi or Dr Pepper.

The best pencil cases were the ones that fooled teachers into thinking you were eating or drinking during class. The Walkers bags of crisps ones worked the best for this.

Who could forget that sudden epiphany you had in school when you realised 5,318,008 written upside-down spelt ‘BOOBIES’ on a calculator.

Those mini Casio calculators were a great distraction during class, and great fun when it came to writing rude words on them.

There was also ‘BOOBLESS’, ‘GO2HELL’ and ‘EGGSHELL’ – along with many other much ruder words and phrases. Some were a bit random and didn’t make much sense, but you had to work with what they gave you.

We would have occasionally used them to do some sums now and again, but they were never allowed during Maths lessons, which rendered them completely pointless.

It didn’t matter how many times they got banned, confiscated or prohibited from tests, kids in the 90s all stood by their set of gel pens.

There were quite girly ones full of glitter that could be used to tease the boys with, with girls marking their notebooks or faces with sparkly gel.

The main excuse for them being banned was that they were ‘hard to read’, which is a pretty feeble excuse when you consider some of the pens had colours that would make a neon billboard blush.

Sporting all the colours of the rainbow, these pens gave you every colour you could want in just one pen. The more colours you had on your pen, the cooler you were, and the more likely you were to have your stationery pinched.

These were probably made to help underline in textbooks or colour-code revision notes or to simply do a bit of light colouring in.

But really, all anyone ever did with these was constantly click the tabs and annoy the teacher – trying to see if you could click all of them at once.

These things would last you about a week before you broke it beyond repair.

Nowadays, so much technology is incredibly more compact, but with a ridiculous amount of space to save important documents.

Back in the 90s if you wanted to bring your documents back to the family Windows 95 computer, or share games on the playground, you’d need a 3.5-inch floppy disc.

These outmoded plastic slabs could hold on them a whopping 1.44 MB worth of memory – which nowadays isn’t even enough to store half a mp3 file.

These were so small, they even came with a label on the front so you could write the name of the one or two files you had saved on it.

With strict uniform rules in most schools, the best fashion statement you could hope for in the playground was the backpack.

Again, they were great for emblazoning with stickers and patches of your favourite cartoons or TV shows.

Brands like Jansport were big in the nineties, but the ‘coolest’ backpacks were the inflatable ones.

Just like the short-lived inflatable settees and Homer Simpson chairs, inflatable backpacks were all the rage back then… up until the point, they got punctured during a particularly rough game of football. 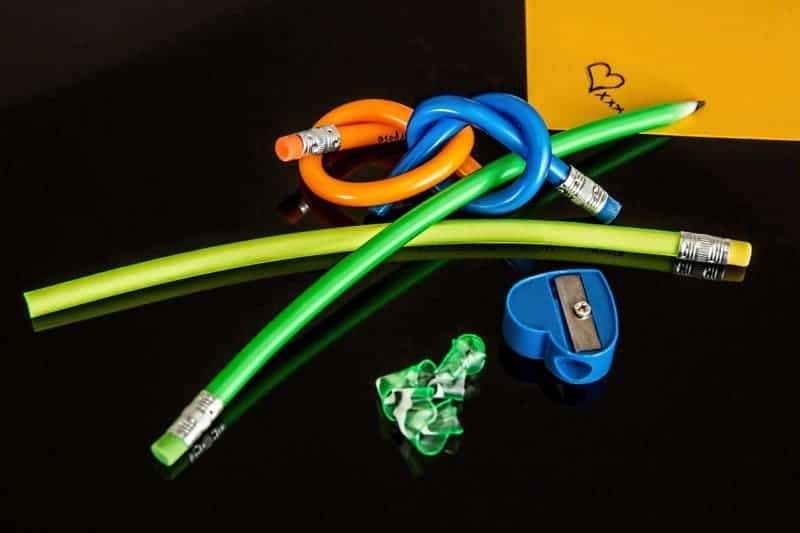 Another great way of accessorising back in your school days, the pencil topper let you show off what cartoons you were into back then. One of the most common ones were the Troll Doll ones.

They might have even been based on shows you didn’t really care for because your TV was only analogue and couldn’t get Nickelodeon – but they fell out of your box of Frosted Shreddies, so you used them anyway.

You would just need to be sure to never take them off your pencil because they would be pinched or get lost almost immediately.

The smellier the better. Whether it’s pens, crayons or erasers, if your stationery smelt like a fruit then you know you were going to be pestered by everyone looking to borrow it.

The nineties were full of fruit-smelling scratch and sniff stickers too – some pleasant and some stinky. If the stationery you were using didn’t at least smell of lemons when you used it, then it was no good.

As cool as they were, some teachers would outright refuse to mark any work you handed in if it had a hint of apricot. Spoilsports.

You were on your own if your pencil broke or started going dull halfway through a test. You needed a sharpener of some kind to avoid asking the teacher and getting told off.

You would probably get told off anyway because those horrible little metal sharpeners got shavings everywhere. They also hurt a lot if a bully decided to throw one at you.

For the real serious workers out there, you needed one of the ones with a little receptacle that collected all the shavings.

If you had of those heavy-duty crank operated ones, then you might have been going a bit too far.

Back to School today

They’ll always be fond memories, but school nowadays is so much easier for kids now, helping them learn much more complicated and important stuff that we never had the chance to in our youth.

With such advancements in technology and the Internet, we have access to things such as the back to school page at MyVoucherCodes to help save you money.

Back to school Stationery