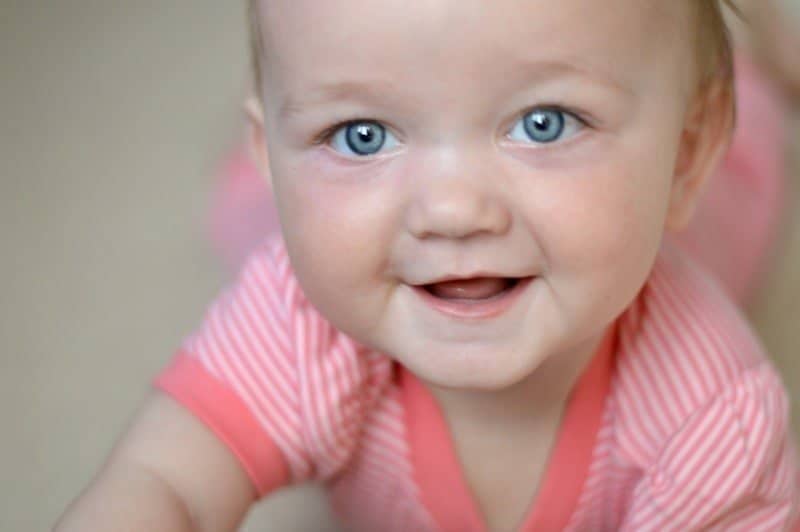 The transition from nine months to ten months seem to have been a big one for Piglet. The past month has seen so many changes in her and her personality is most certainly showing.

Sadly, for the past two weeks or so she has been under the weather will a bit of a cold which turned into a chest infection last week. We’ve had a few nights just cuddled on the sofa all night as the only place she wanted to be was in my arms. With a burning temperature, coughing and lots of snot I was too worried to leave her in her cot even if she would have settled. Thankfully a course of antibiotics seems to be doing the trick and she is getting back to normal.

Whilst she has been commando crawling for a little while now, she has perfected her wiggle. Although I thought that she was fast whizzing around the living room, that is nothing compared to when she spots that the safety gate is open. She crawls off at lightning speed, occasionally glancing to see whether anyone is chasing after her.

After learning how to sit up by herself after crawling over to wherever she wanted to be she has grown in confidence. Although I do often catch her sitting in the ‘W’ position which I then correct her but it’s something I’m keeping an eye on as she has issues with her hips at birth. She is usually found pulling herself up onto her knees against te TV cabinet or sofas. Attempting to pull herself up to her feet, but not quite there yet. This girl is going to give me a heart attack with her fearless attitude. I don’t think we’ll be waiting too much longer before we have a walker on our hands.

Her first tooth has finally made an appearance. I began to wonder whether she would get any before her first birthday. Fingers crossed that the others make an appearance soon so that she can finally start chewing on foods, rather than gumming them to death.

Weaning is going OK, although we still aren’t in much of a feeding schedule. She has swapped from two shorter naps to one longer one which has thrown our usual routine. She isn’t too keen on being spoon fed (far too independent for that), so we’re opting for a baby led weaning approach with finger foods etc for her.

I look at Piglet’s personality and there are times when I really do see Mr. Boo’s Nanny in her (her middle name was his Nanny’s name). Whilst she has her grumpy moments, she is generally a happy, smiling baby. There is, however, a mischievous side to her. I can see her looking at me as she does something that she shouldn’t be testing my boundaries. This one is going to keep me on my toes.

It’s hard to believe that she’s already ten months old. I need to start thinking about her first birthday. 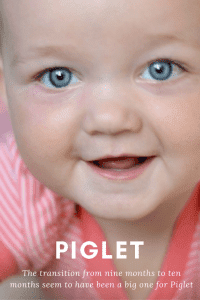