Every now and again you get something that drops into your inbox that you would really love to take part in. Mumsnet popped one of those emails over to me back in February. The email was inviting bloggers to apply to join the Tefal Innovation Panel. There would be an event to attend in April and to try out new Tefal products and review them on our blogs. The sentence that made me want this opportunity…

Tefal are wanting to showcase a range of new products – including Cookware, Electrical Cooking and Linen Care. Key products are the Actifry, Fresh Express and the linen care range, which includes its legendary steam generators.

To be honest it was the opportunity to try out a steam generator iron that I really wanted. As some of you will remember from my recent ironing post you will know just how much I love to iron. Anyway, at the end of March I received an email from Mumsnet thinking it was a ‘thank you for applying but no thanks’ email I have to be honest that I only skimmed over what was written, it was only when one of the attachments said congratulations that I re-read the email. I rang Mr Boo at work and told him he needed to book the day of  work so he could look after Tigger. 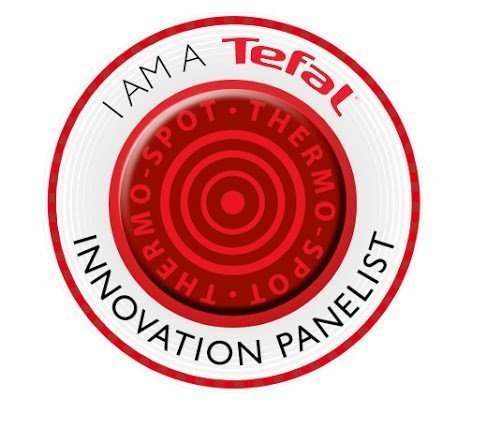 As the Tefal and Group SEB headquarters is based in Windsor it meant an early morning train ride, leaving Great Yarmouth at 5.47am! What a girl will do see a steam generator in action. The trains has their usual bout of cancellations, delays etc but thankfully I managed to get to Windsor in one piece. After being greeted at the train station and taken on the short walk to their offices (you can literally see inside the station from their offices).

Unfortunately only 10 of the 12 Tefal Innovation Panelists were able to attend, however it was lovely to get the chance to put Twitter names to faces and blogs as well as meet a few new blogs/bloggers.

So who are the 12 Tefal Innovation Panelists?

We were given a fantastic history lesson from Steve Lowe, on Tefal which has been around for over a century so they know what it is they are talking about. The innovators in non-stick cooking after an engineer came up with a product to stop his fishing reel from sticking and his wife asked if he could do the same to her cooking pans.
Next up was a visit to their kitchen area where some amazing demonstrations had been set up for us. First up was the Tefal Pro Express Turbo steam generator iron, to say I was in my element was an understatement. 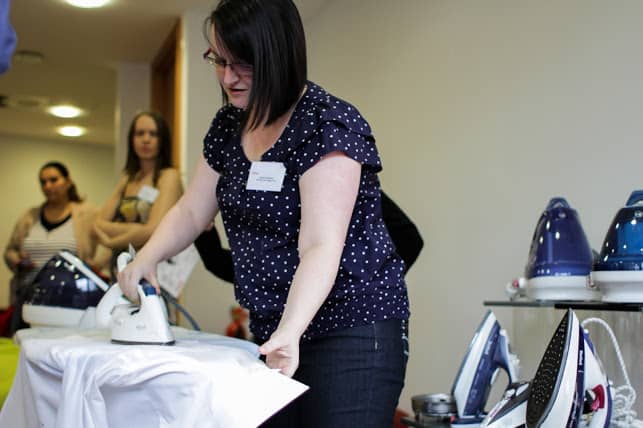 Even those who don’t normally like or do the ironing were impressed by the steam power and ease of ironing. Although I really do need to invest in a new ironing board!
Secondly, we were showed the benefits of having good pots and pans. Having Tefal pans at home I could already understand just how useful the pans can be. There were two demonstrations that were shown to us that I had not tried at home but made me want to utilise my pans better. Burnt milk that simply peeled off the pan under warm water and frying an egg with no oil. 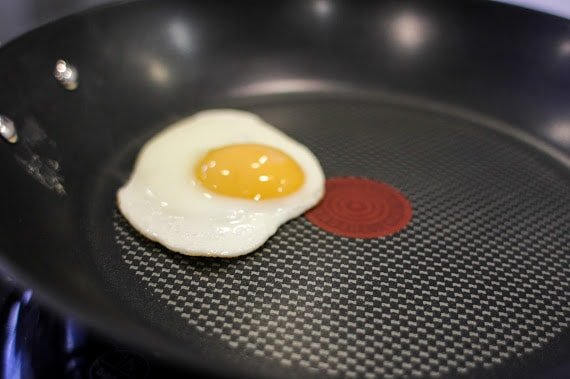 We were then treated to a demonstration of the Tefal Actifry which is a product that Tefal are famous for. They now have four models available from a 1kg capacity, 1.2kg capacity, 1.5kg large family capacity to their latest 2-in-1 model which allows two items to be cooked at the same time. 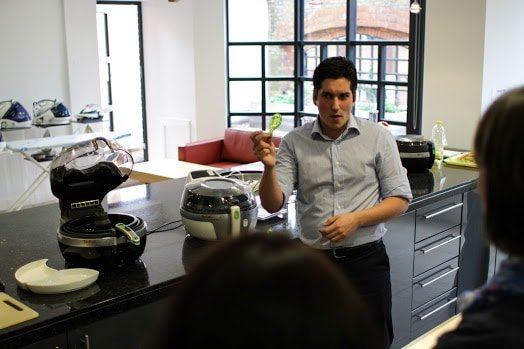 Finally but by no means least was the Fresh Express, a relatively new Tefal Product that helps cut down on those cutting, dicing and grating jobs in the kitchen. I was surprised to see just how easy it was to slice, grate etc using the machine… I think even Roo would be able to use it. There was a heart stopping moment for me when the lady showed use how safe it is to use that you can place your hand inside whilst it is on as the blades are on the outside of the cones. Needless to say I jumped and gave a little yell, much to the amusement of everyone. 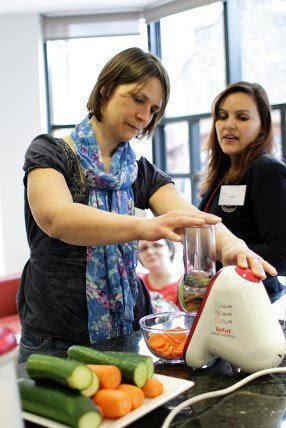 After all the wonderful and informative demonstrations we were then treated to a gorgeous lunch, prepared and cooked using the Fress Express and Actifry… delicious! 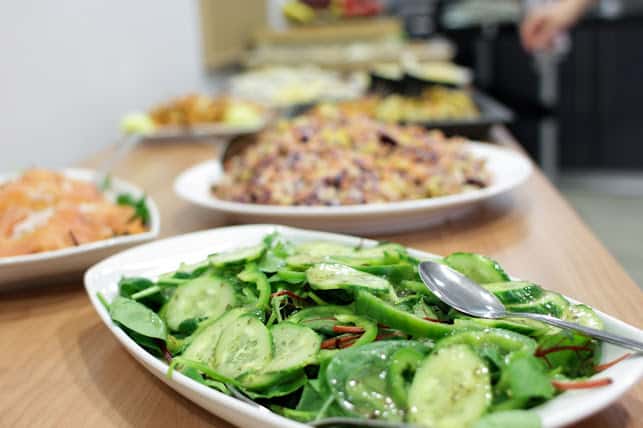