Generally speaking you can usually find Roo doing one of two things (if not both)… singing and dancing. There is nothing she loves more than dancing around the living room showing off her latest routine which may well be accompanied by a tune or two. For Christmas she has requested her very own microphone so that she can truly look like a pop princess!

At the end of the summer the latest Barbie™ film was released Barbie™ in Rock ‘n Royals which Roo bought with some of her pocket-money and has been watching Courtney transform for princess to rock star. The film has only added to her ambition to become a pop princess 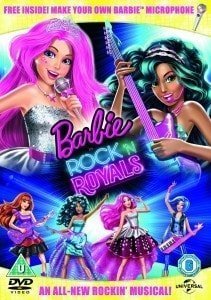 In this brand-new musical adventure two very different worlds collide, when a mix-up sends a princess and a rock star to the wrong camps where they must face an epic sing-off! Barbie stars as Courtney who transforms from a royal to a rocker.

Barbie in Rock ‘n Royals is available on DVD and Digital Download.

To celebrate the launch of the new DVD Barbie™ in Rock ‘n Royals, Barbie are partnering with Little Mix to give girls the chance to enter a singing competition to ‘Raise Your Voice!’ Little Mix will pick the lucky winner who will also get to meet the band at their concerts!

The competition runs from 5th September – 18th October, and you can enter by visiting www.nick.co.uk/barbie.

One of the two dolls available to co-inside with the Barbie™ in Rock n Royals DVD is the Barbie in Rock n Royals – Courtney doll and Roo was kindly sent one over recently to see how much fun she could have with her very own princess and rock star.

The Barbie™ in Rock ‘n Royals – Courtney doll is able to change from princess to rock star by simply moving the microphone within her hand up to her lips. With this easy movement her dress spins round to reveal an outfit ready for performing in whilst Courtney bursts into song.

With Roo’s love of dancing and singing I pretty much knew that this Barbie™ in Rock ‘n Royals – Courtney doll would be a hit with her. With Courtney being able to transform between princess and rock star really appealed to Roo and loved that she was able to sing two songs by either raising the microphone to Courtney’s face or by pressing the jewel on her necklace.

Underneath the skirt of the Barbie™ in Rock ‘n Royals – Courtney doll is the battery pack and speaker for the musical element of the doll. Due to this it does make the middle of doll quite bulky for little hands so Roo tended to carry her around by holding her legs. It does also mean that Barbie was unable to stand unaided unless you really tried hard to balance her on a table etc. although this doesn’t affect the role-playing element of the doll so Roo wasn’t bothered by this.

Barbie™ in Rock ‘n Royals – Courtney doll is priced at RRP £22.99 and is available from Amazon, Argos and all other good toy retailers.

Take a look at what other people thought of the Barbie™ in Rock ‘n Royals – Courtney doll:
Mostly Yummy Mummy

Disclosure: We received a Barbie™ in Rock ‘n Royals – Courtney doll FOC for the purpose of review.

REVIEW: Back to School with Sonic the Hedgehog