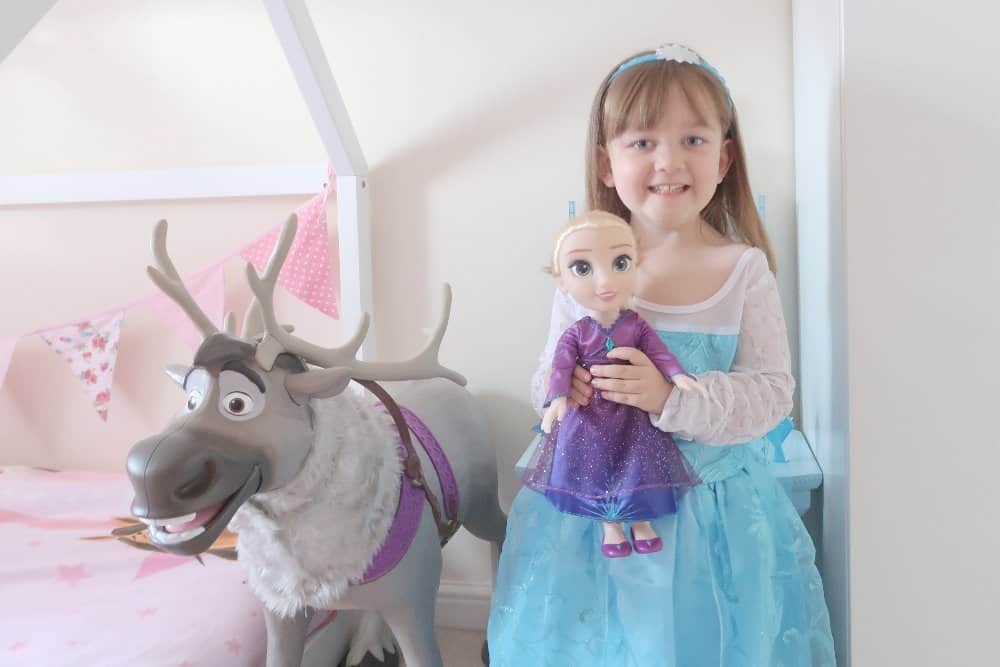 Six years ago when Frozen first came into the cinema, Roo was at the age where she was happy to watch the film but wasn’t hit by ‘Frozen Fever’. As the years have gone by and the film has continued to be just as popular, Piglet finally discovered the famous sisters Elsa and Anna. From that first watch, Frozen Fever hit her and she loved everything about the magical, the snow and the songs from the film.

Now that there is finally a new film heading into cinemas later this month, she is so excited to see the sisters back in action on the big screen. Luckily for Piglet, her birthday is just days after the UK release date so we have a special family cinema treat planned for her.

Ahead of the cinema release Jakks Pacific has released some Frozen inspired toys to allow children to bring the magic of the big screen into their homes. A chance to recreate some of the screens, create their own storylines and role play with the different Frozen characters and playsets.

Celebrate the story of Elsa with Disney Frozen 2 Elsa’s Enchanted Ice Vanity! Get ready to explore Elsa’s world with this enchanting vanity inspired by Elsa’s ice powers from the film. Open the vanity doors and see Arendelle’s castle appear in stunning lights! See moments from Elsa’s amazing journey in Frozen 2 and hear 2 iconic songs from Frozen and Frozen 2.

The rigid plastic vanity comes unassembled packed within a large box, however, it does contain minimal packaging – which is always a good thing. The instruction leaflet enclosed gives step-by-step instructions on how to assemble the Enchanted Ice Vanity. Clicking the various parts into place, unpacking the accessories and adding 3x AA batteries in order for the lights and sound function to operate (with a handy on/off switch located on the back).

This is quite a large ‘toy’ and one that will take up a corner or wall space in their bedroom/playroom/living room etc. However, it is a sturdy build and is surprisingly light to move from room to room. I can see this being utilised in the garden during the summer or within Piglet’s playhouse.

I was a little disappointed to see that the inside of the vanity doors is cardboard cutouts inserted to give the crystal/ice effect illusion. Whilst it looks ok, I’m not sure how well these will stand up to play, especially as they have already started to slip making closing the vanity doors a little tricky for Piglet.

This being said Piglet loves it, from the magic of opening up the vanity doors to reveal Arendelle Castle and pressing the snowflake to see the different images appear on the mirror. The accessories are a nice touch, with the brush, comb and clips all usable items within her hair.

Where can you buy the Frozen 2 Elsa’s Enchanted Ice Vanity?

The Frozen 2 Elsa’s Enchanted Ice Vanity is available to buy from Smyths Toys and all other good toy retailers.

Hop on for a wild adventure like never before with Disney Frozen 2 Playdate Sven! Playdate Sven is child-size, perfect for a child to pretend they are galloping around the landscape of Arendelle with their favourite reindeer pal!

One of the great things about the Frozen 2 Playdate Sven is the minimal assembly you need to do with him. Simply unbox, pull up his antlers until they click and untie his carrot. The antlers can be a little tricky to stay in position, it does state on the instruction leaflet that once locked in place they shouldn’t be pulled on. However, they are at the perfect height and size for little ones to grab hold off and subsequently, our Sven’s antlers have fallen back into the unlocked position – which I don’t think really matters.

Frozen 2 Playdate Sven // what we thought…

There is no doubting that this is not only a substantial item to have under the tree and stored within your home, but also a big price ticket present. Something that might be out of reach of many budgets, however, could be something to be purchased as a collaborative gift between grandparents etc.

Standing at 3ft tall with Sven’s cute yet dopey look on his face you can’t help but smile when you see him sitting staring at you. And trust me, you will think he is staring at you no matter which way you face him in the room. With anyone who comes into the room making a comment about him. The children gravitate towards him and have been loving taking it in turns sitting on top of him and interacting with him.

As a parent, I do feel as though I Sven should have more interacting features considering the price tag. With the sit on and ride, feeding and sound features all lovely and the children seem happy with these. I just think that even adding in a sensor so that he interacts automatically without pulling on the reins or similar would have been good.

Where can you buy the Frozen 2 Playdate Sven?

The Frozen 2 Playdate Sven is available to buy from Smyths Toys and all other good toy retailers.

Immerse yourself in mystery and wonder with Disney Frozen 2 Purple Nightgown Elsa Doll. Relive the beautiful, pivotal moment in the film when Elsa sings her powerful new song. See Elsa’s dress light up in the gorgeous pattern inspired by this impactful scene while she sings and says film-inspired phrases.

On the back of Elsa there is a switch with three modes:

Piglet has a bit of a thing about dolls, she adores them so as soon as she laid eyes on the Disney Frozen 2 Elsa Singing Doll she was in love. Even before she realised whilst looking adorable, Elsa sang and her beautiful dress lit up.

With moveable arms, she is able to be posed into grand singing gestures, whilst her legs and feet are not poseable they do provide a sturdy platform for her to stand unaided. She does sing surprisingly loud and there isn’t a volume dimmer switch or on/off switch so one that doesn’t want to be taken to bed at night.

The Singing Elsa doll is on the Dream Toys Christmas List for this year and I can see why it’s a good price point and one that can be utilised within role play, great for imagination plus a big dose of Frozen music.

Where can you buy the Disney Frozen 2 Elsa Singing Doll?

The Disney Frozen 2 Elsa Singing Doll is available to buy from Smyths Toys and all other good toy retailers.

Are you looking forward to watching the new Frozen 2 film?
Do you have a Frozen fan who will be adding Frozen toys to their Christmas wishlist? 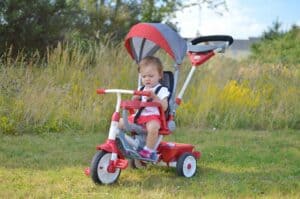 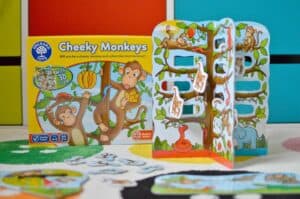