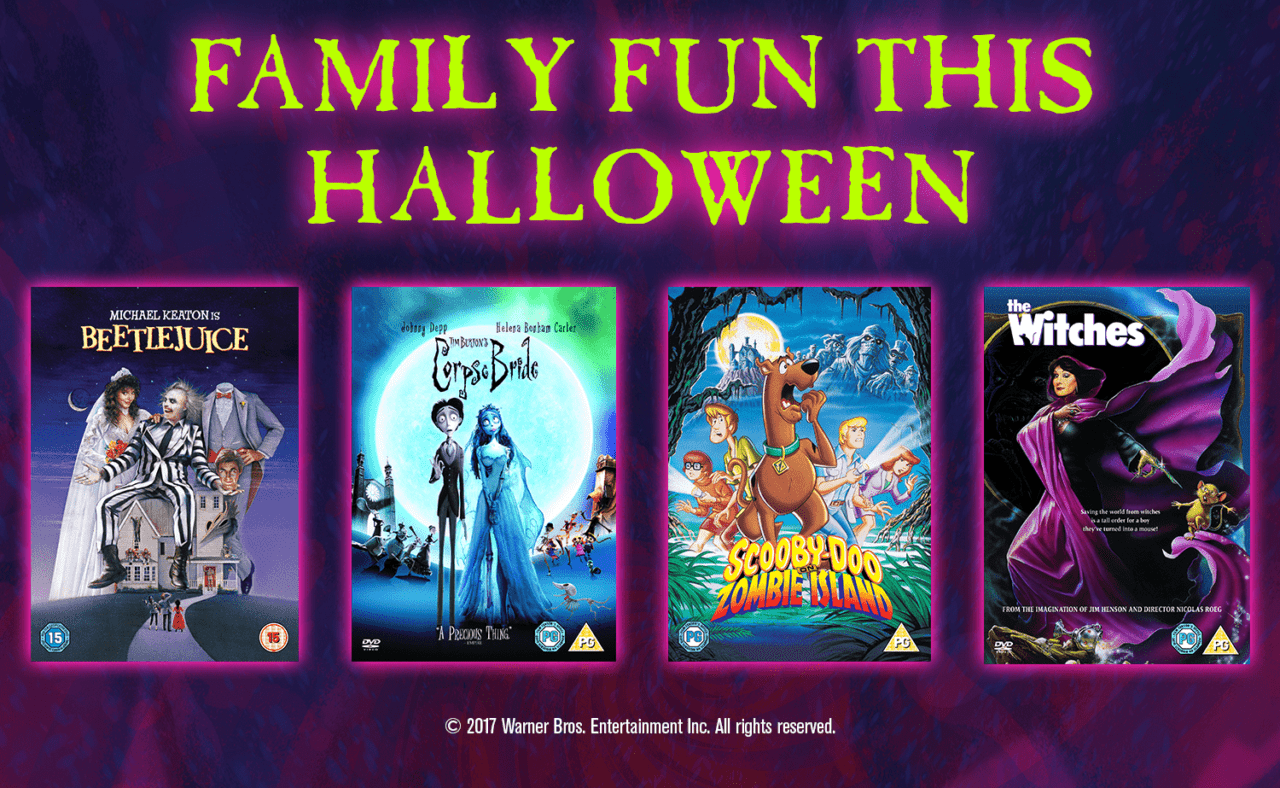 Halloween is almost upon us for another year. Whilst you might be busy organising Halloween costumes, or planning how to decorate your house for Halloween. It is also time to prepare for the clocks going back and the dark night drawing in. So what better time to sit down, snuggle up and enjoy some family fun this Halloween. Fill up the popcorn, grab a drink and enjoy these family films to enjoy this Halloween.

4 Family Films to enjoy this Halloween

What’s a yuppie ghost couple to do when their quaint New England home is overrun by trendy New Yorkers? Hire a freelance ‘bio-exorcist’ to spook the intruders, of course.

Beetlejuice is one of the films from my childhood and it’s lovely to be able to share this with the next generation. Showcasing a classic Tim Burton film that has stood the test of time as is just as thrilling for Roo and Tigger as it was for myself and Mr. Boo when we were younger.

Set in a 19th-century European village, this stop-motion animated feature follows the story of Victor, a young man whisked away to the underworld and wed to a mysterious Corpse Bride, while his real bride Victoria waits bereft in the land of the living. Through life in the Land of the Dead proves to be a lot more colourful than his strict upbringing, Victor learns that there is nothing in this world – or the next – that can keep him away from his one true love.

This is one of the films that Mr. Boo and I made a trip to the cinema to enjoy when it was first released. Following in the footsteps of Edward Scissorhands and The Nightmare Before Christmas. Corpse Bride brings Tim Burton’s quirky mind to life on-screen. Roo especially enjoyed the Corpse Bride and was drawn into the romantic side of the tale.

Scooby-Doo, Shaggy, Velma, Daphne, and Fred reunite to solve the most frightfully funny mystery of their careers. The scream team’s headed to a haunted bayou island to investigate the ghost of Moonscar the pirate. But it turns out the swashbuckler’s spirit isn’t the only creepy character on the island. The sleuths also meet up with cat creatures and zombies… and it looks like for the first time in their lives these ghouls might actually be real.

There is never an excuse required in the Boo Roo and Tigger Too household to pull out a Scooby-Doo mystery to enjoy. The Zombie Island mystery was, however, a new one for us and it was filled with all the classic suspense and Scooby-Doo action you would expect from the gang.

Luke and his wise Grandmother arrive at an English seaside hotel where the Royal Commission for Prevention of Cruelty to Children is holding a convention. Luke discovers that its members are not charity workers but wicked witches who plan to turn all children into mice – starting with him. The mouse-Luke must alert his Grandma and stop their dastardly plan.

The Witches story is a much-loved book and film in our home, enjoyed all year round but especially at Halloween. Featuring some of Hollywood’s finest the storyline draws you in and you are soon rooting for Luke and his Grandma to triumph over the wicked witches.

Disclosure: We received a #WBHalloween DVD Bundle FOC for the purpose of review