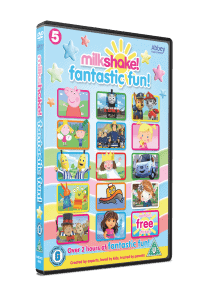 A host of characters from Channel 5’s Milkshake! have joined forces for a special bumper collection of episodes in this brand new DVD collection, Milkshake! Fantastic Fun! to be released on Monday 19th October by Abbey Home Media.

Fans of Milkshake! everywhere will love this collection of their ‘fantastic fun’ friends. Milkshake! Fantastic Fun! is released onto DVD on 19th October.

To celebrate the release of Milkshake! Fantastic Fun! on DVD, Boo Roo and Tigger Too are lucky enough to have one DVD of the new adventures to giveaway.

To enter simply leave a comment telling me what your favourite Milkshake programme is, then complete the Gleam widget below: