National Stationery Week, the annual awareness campaign that celebrates all things stationery, will be stamping its mark on letters being posted in the United Kingdom and sent across the World in April.

With help from the Royal Mail, the biggest consumer campaign for the stationery industry will have its logo, along with its #writingmatters hashtag, franked on the top of every letter posted from Monday 24 April to Saturday 29 April.

It is hoped that the postmark will not only be seen by millions of people but also encourage people, young and old, to get involved with the event to prove that writing matters by sending letters to loved ones and friends.

The postmark is an important part of the campaign which aims to prove the importance of handwriting. The week marks ‘Seven Days of Stationery,’ which has a different stationery related theme every day including ‘Thank You Thursday’ and ‘Write a Letter Day’, with the latter occurring on Sunday 30 April.

“Letters are an enjoyable way to share emotions and stories with people you care about and vital to receiving important correspondence. We’re excited to be a part of that.

“I’m looking forward to sharing the campaign with millions of people throughout the United Kingdom and seeing the colourful logo appear on my letters during National Stationery Week thanks to the Royal Mail.”

Following the announcement of the use of the postmark, David Gold, Director of Public Affairs at Royal Mail said:

“Throughout history, letters and the written word have shaped our culture and captured our imagination. While other forms of communication continue to grow in popularity, nothing conveys the sender’s true feelings as effectively as a hand written letter. We’re looking forward to being a key part of National Stationery Week 2017.”

National Stationery Week runs from Monday 24 April to Sunday 30 April and is the annual consumer campaign celebrating all things stationery and proving that ‘Writing matters’. The campaign is sponsored by Sheaffer and Nu: Notebooks. 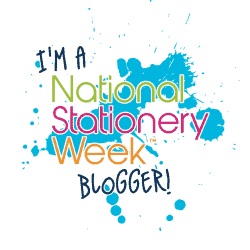