With Piglet recently starting at the nursery we have started to get the scribbles of crayon on a piece of paper sent home – sorry I mean, artwork masterpiece. Whilst I have kept the first one or two of them for her memory box, the rest will be displayed until a new one is sent home and then filed in the B1N.

An interesting new study into the habits of parents in UK and Republic of Ireland has been commissioned by BIC. It has uncovered some of the guilty secrets of how parents deal with their children’s artwork! Shockingly, over 50% of parents secretly file their children’s artwork in the bin due to the sheer volume and almost two-fifths have even been caught doing so. This obviously shows that children are prolific artists and obviously enjoy creating artwork. 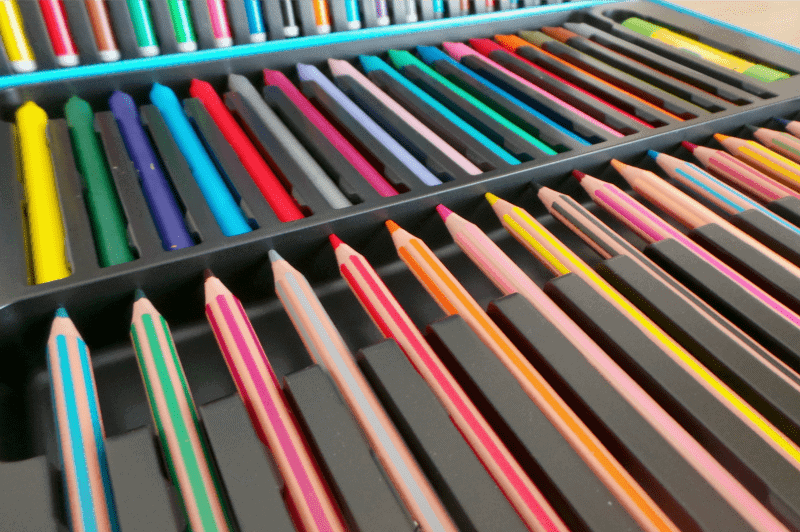 What to do with children’s artwork?

Whilst many parents don’t know what to do with their children’s artwork, there’s a healthy 92% of parents who are very proud to display their little one’s masterpieces throughout their home. However, It seems though that the fridge door is still one of our favourite ways to display our children’s artwork with over 84% doing so. It also seems we’re not averse to spreading some love by passing on our little artist’s artwork to grandparents and other relatives.

Over three-quarters of parents were of the opinion that children’s artwork on display was the sign of a happy home. Even more revealing, two-thirds said it showed creativity and inspired children revealing parents who were proud of their children’s artwork. So isn’t it time that we all took greater pride in our children’s artwork and didn’t hide it away in a box or throw it out? Elevate your child’s artwork to pride of place in your home and you’ll elevate their self-esteem and who knows, maybe you’ll even be responsible for encouraging the next Van Gogh, Banksy or Verdun!

Either way, you’ll be able to see the results of all those little artists who enter BIC’s young artist award for 5-11 year old’s. The competition which opened on the 17th July will show the fruits of its labour this September as the winners’ artwork is displayed on huge billboards around the country. So, who knows, maybe next year, your budding little Monet’s work will be starring on a billboard near you instead of the kitchen fridge!

What do you do with your children’s artwork?

This website uses cookies to improve your experience while you navigate through the website. Out of these, the cookies that are categorized as necessary are stored on your browser as they are essential for the working of basic functionalities of the website. We also use third-party cookies that help us analyze and understand how you use this website. These cookies will be stored in your browser only with your consent. You also have the option to opt-out of these cookies. But opting out of some of these cookies may affect your browsing experience.
Necessary Always Enabled
Necessary cookies are absolutely essential for the website to function properly. These cookies ensure basic functionalities and security features of the website, anonymously.
Functional
Functional cookies help to perform certain functionalities like sharing the content of the website on social media platforms, collect feedbacks, and other third-party features.
Performance
Performance cookies are used to understand and analyze the key performance indexes of the website which helps in delivering a better user experience for the visitors.
Analytics
Analytical cookies are used to understand how visitors interact with the website. These cookies help provide information on metrics the number of visitors, bounce rate, traffic source, etc.
Advertisement
Advertisement cookies are used to provide visitors with relevant ads and marketing campaigns. These cookies track visitors across websites and collect information to provide customized ads.
Others
Other uncategorized cookies are those that are being analyzed and have not been classified into a category as yet.
SAVE & ACCEPT
24 shares