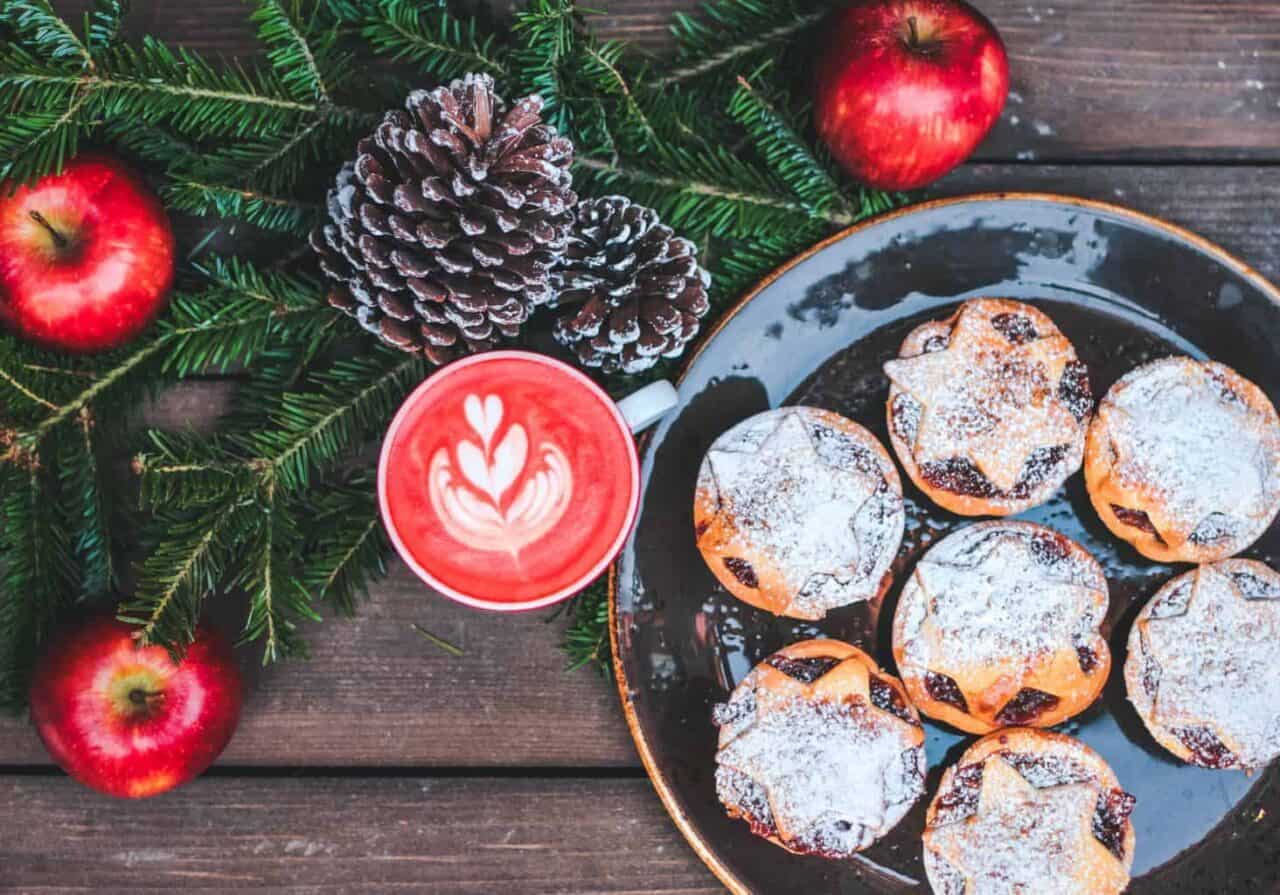 Santa may be a little less jolly this year when he discovers how many calories a mince pie contains – especially if that mince pie has come from Asda, research reveals.

A study conducted by fitness experts Nuyoo.co has shown that Asda’s mince pies were the most calorific of all supermarkets included in the research, weighing in at a whopping 280 calories per mince pie. That’s 48 calories more than the lightest option: a 232-calorie mince pie from Morrisons.

If you are looking to avoid piling on the pounds this Christmas, you may want to check which supermarkets are stocking the lowest calorie version of your favourite seasonal treats.

Nuyoo.co have compared holiday items from five major supermarkets (Asda, Tesco, Sainsbury’s, Waitrose and Morrisons), to see which supermarkets will leave your stomach looking like Santa’s. The study has examined nutritional information for goods such as mince pies, cranberry sauce, and pigs in blankets, comparing the same portion size each time.

Nuyoo.co discovered that making the right supermarket choice for Christmas groceries could save you an enormous 556 calories, which is 28% of a woman’s daily calorie intake, and 22% of a man’s.

On average, the report suggests that it is wiser for your waistline to shop at Morrisons this year, and a disaster for your diet to buy from Waitrose. 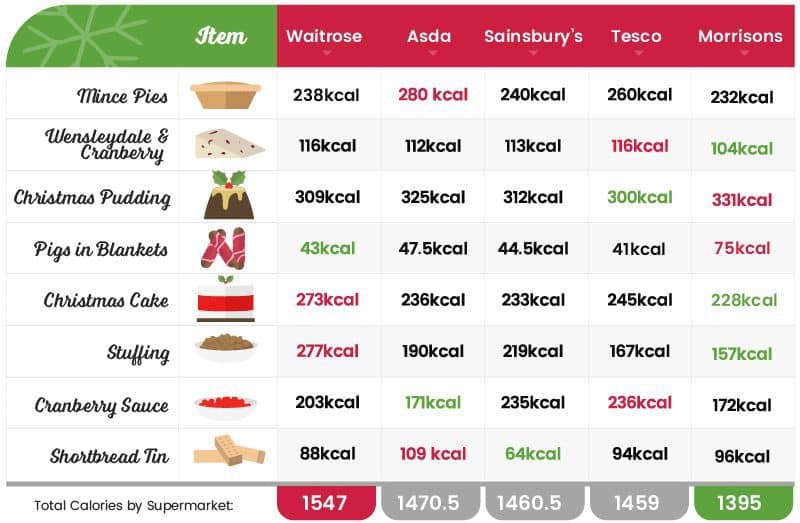 Which Supermarkets have the most sugar per item?

Through Nuyoo’s analysis, it was revealed that Sainsbury’s, on average, slip the most sugar into their seasonal products. Asda on the other hand rank last for sugar content, and the difference between the two was 20.7g of sugar, the equivalent of over 5 teaspoons, or 74% of your recommended daily allowance.

In fact, if you bought the lowest sugar-containing items each time, you would save a massive 46.4g of sugar, or 12 teaspoons, which is the equivalent of almost 2 days’ worth of sugar intake.

The biggest game-changers, or Christmas purchases with the largest sugar content difference, were cranberry sauce (where switching to Morrisons from Sainsbury’s could save you 17g of sugar!), mince pies (8g difference per mince pie) and Christmas cake (8g of sugar difference). 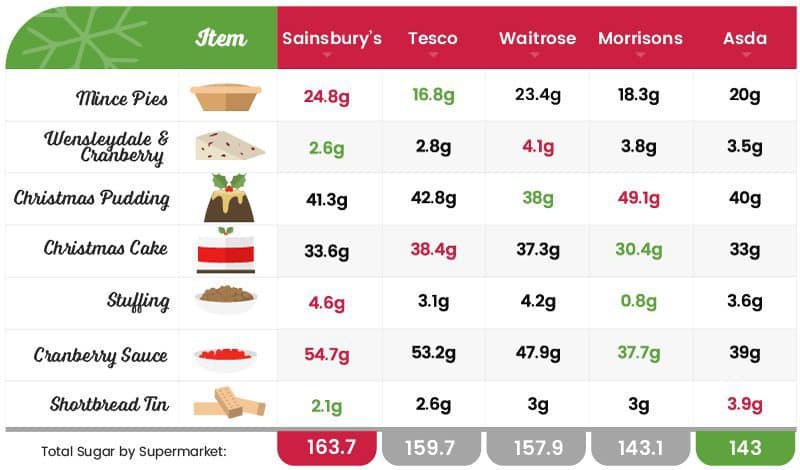 The numbers reveal that if it is fat content you are looking to avoid this holiday season, then steer clear of Waitrose, where the total fat content of the selected Christmas items contained a whole 19.3g more than the fat content at the lighter-option supermarket, which was Sainsbury’s.

Making low-fat decisions for each item on this Christmas list could, in fact, save you 31g of fat in total. Which is a huge amount, considering men shouldn’t have more than 30g of saturated fat a day, and women no more than 20g. 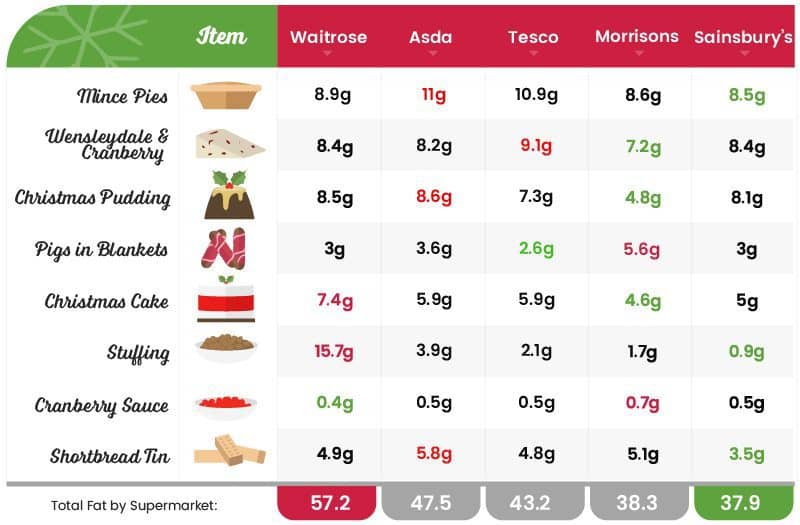 “It is hard to avoid Christmas treats, but smarter decisions could be made this year when it comes to your holiday shop. It may seem like an effort to go to different supermarkets, but the number of calories that you can save – 556 – is definitely not to be sniffed at, it’s the equivalent of 7 roast potatoes!”
Abby Chinery, spokesperson for NuYoo.co 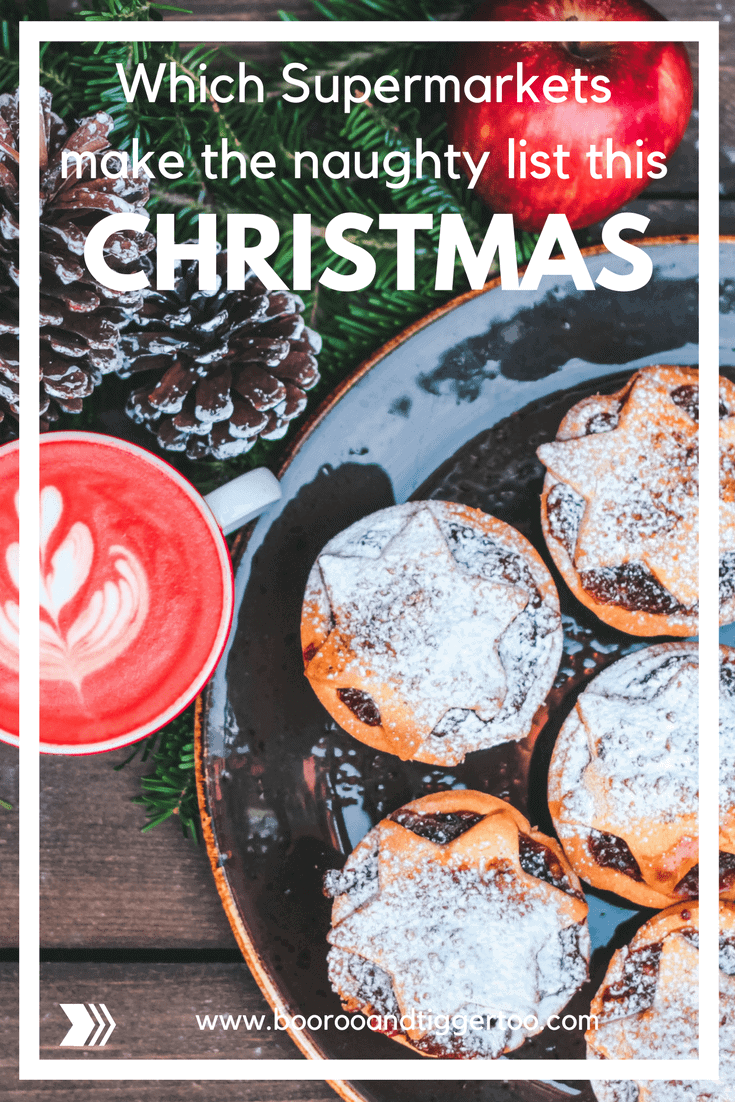