Boj the new animated TV series on CBeebies for 3-6 year olds. It follows the life of the main character Boj, who is a bilby – an endangered big-eared bandicoot from the Australian Outback. Boj has arrived in Giggly Park with his musical parents Mimi and Pops (voiced by pop icon Jason Donovan) where they now live in their simple, quirky underground burrow at the heart of their new neighbourhood.

Boj is full of creativity and messy fun. With his improvised Boj-a-boom ideas Boj can solve everybody’s problems, and when Boj gets Boj-ing he builds friendships and bonds the whole community together. The series has inspired kids to get ‘Boj-ing’ at home too, where they are ‘upcycling’ – creating stuff from other stuff – in true Boj-style. After watching the show, young Bojfans are spontaneously asking their parents if they can play with cardboard boxes and other previously unloved old stuff. The Boj Facebook page has been overwhelmed by examples of such wonderful creations.

Boj is a celebration of childhood. Boj shows us all how to loosen up, be free-thinking, creative, pro-active and resourceful – and ultimately how to put aside our differences and all get along!

“It’s a pleasure to be involved in such a well-crafted project. I’m interested in great characters, great stories, great songs andBoj has all those things and more. As a good Aussie dad Pops is very close to my heart and I’m looking forward to that special time before my daughter Molly starts school when we’ll enjoy watching Boj together.” – Jason Donovan

Boj is on CBeebies six days a week in the mornings at 7:30am

For more information please check out the Boj website http://boj.tv

To celebrate Boj on CBeebies, Boo Roo and Tigger Too have three Boj children’s t-shirts to giveaway (age 3-4). 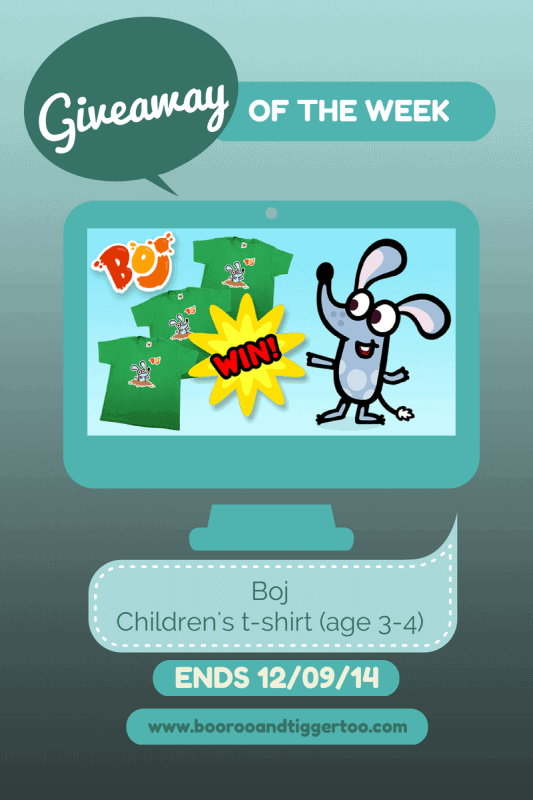 To enter simply tell me what animal is Boj? then complete the Rafflecopter widget below. Optional additional entries are also available.

Disclosure: I have received no financial or product compensation for this post – just sharing the giveaway love.