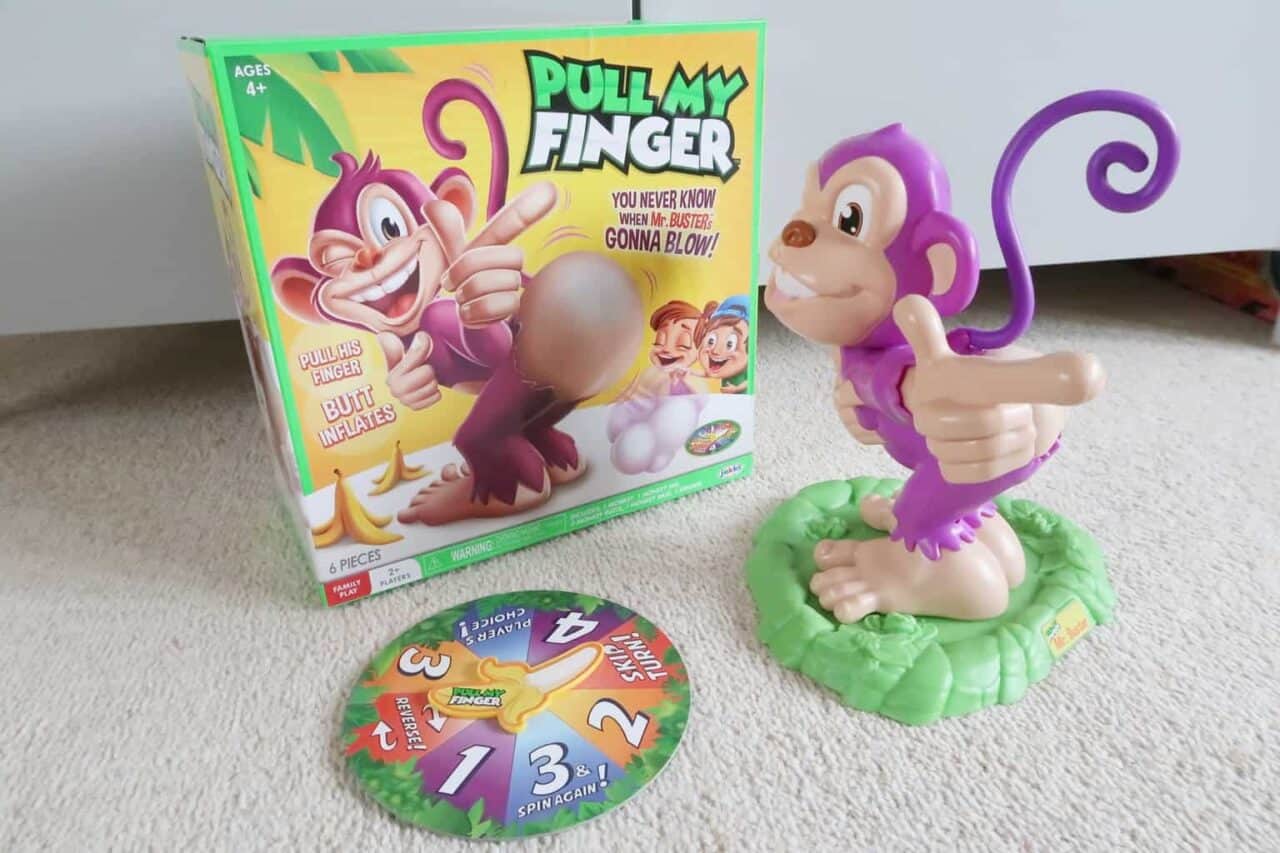 There are two types of people in this world… The ones who find farts funny and those who don’t. I’m very much in the former camp on this subject. It’s not clever, it’s not grown up but seriously, farts are just so funny. There is nothing that lightens the mood quite like someone farting (even if it is quite possibly the worst smell you’ve smelt!).

Given that I find farts funny, you’ll have probably gathered that Mr Boo and the children all follow suit. We are THAT family! So when Jakks Pacific offered us the Pull My Finger game, of course, we said yes! In fact, it was already on Tigger’s wish list!

Pull My Finger – You know you want to… 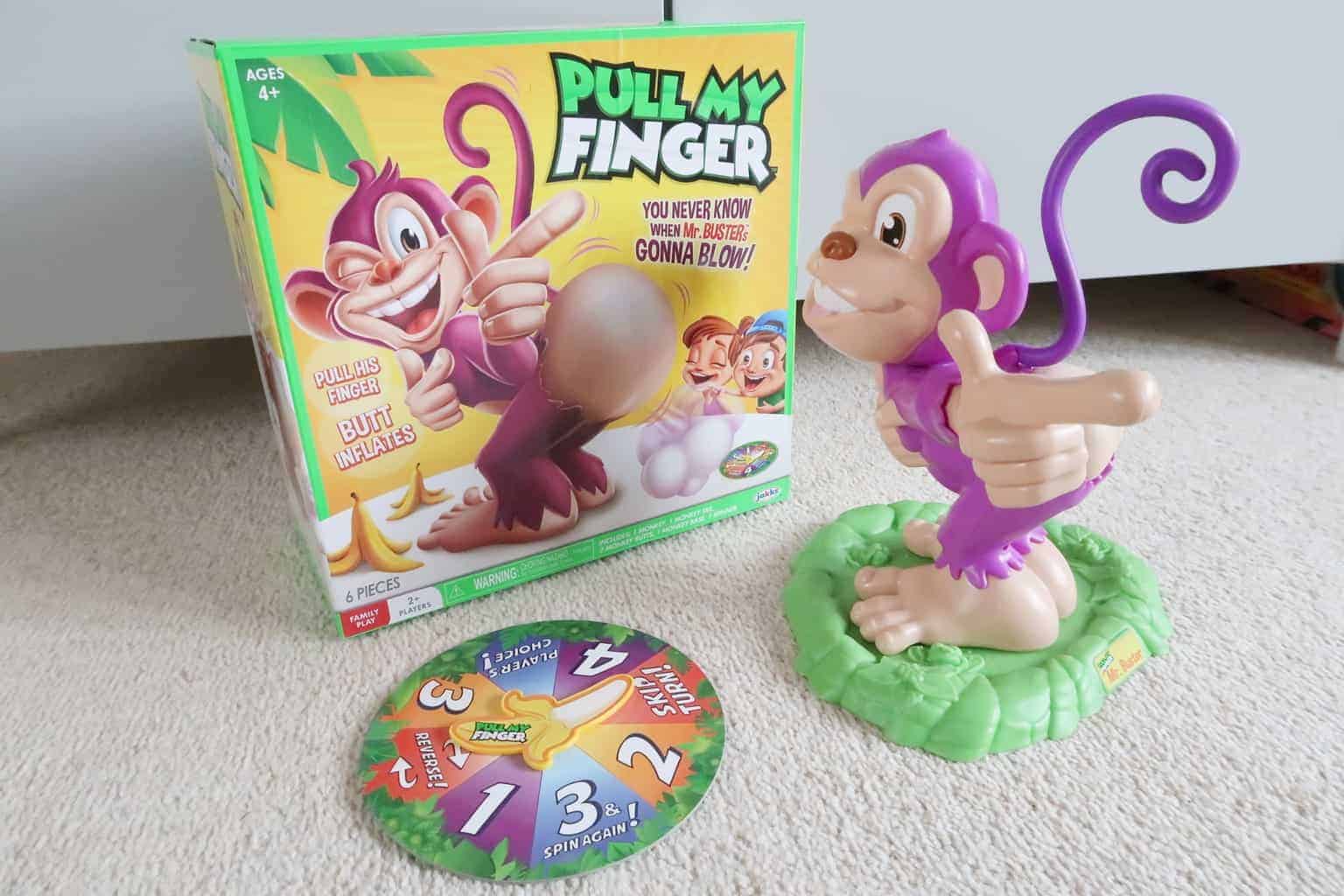 You never know when he’s going to blow! Pull My Finger is the hilarious game that combines 2 things that make everyone laugh, Monkeys & Farts!

Spin the banana spinner, pull the Monkey’s finger, and watch his BUTT INFLATE with each pull! How BIG will his BUTT get? How long can he hold it in?

Avoid the Farts and WIN! 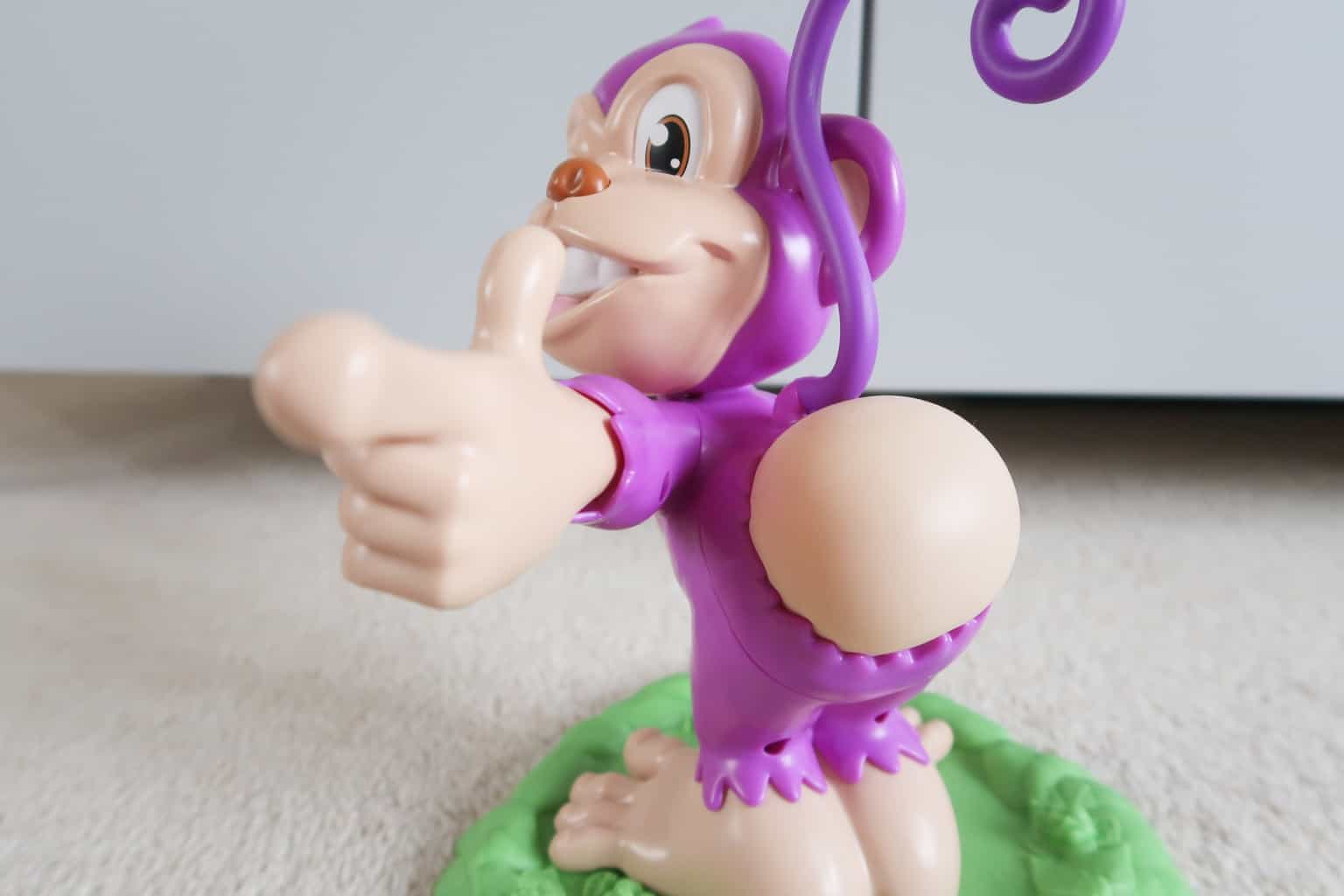 How to play the Pull My Finger game

Once you have assembled Mr Buster the monkey on to his platform, you need to attach one of his butts (two are included – one as a Monkey Butt replacement – snigger) along with his tail. Then you are ready for gameplay…

Gameplay for this game is a relatively simple one and is aimed at children aged 4. One that they can play with siblings, friends and family members. It takes a couple of butt inflates to get it used to the stretch which then makes it easier for little ones to pull Mr Buster’s finger.

The resounding finish of Mr Buster is a little hit and miss, with some great sounds whilst others are a little disappointing. Which usually leaves the children attempting to make their own fart sounds! 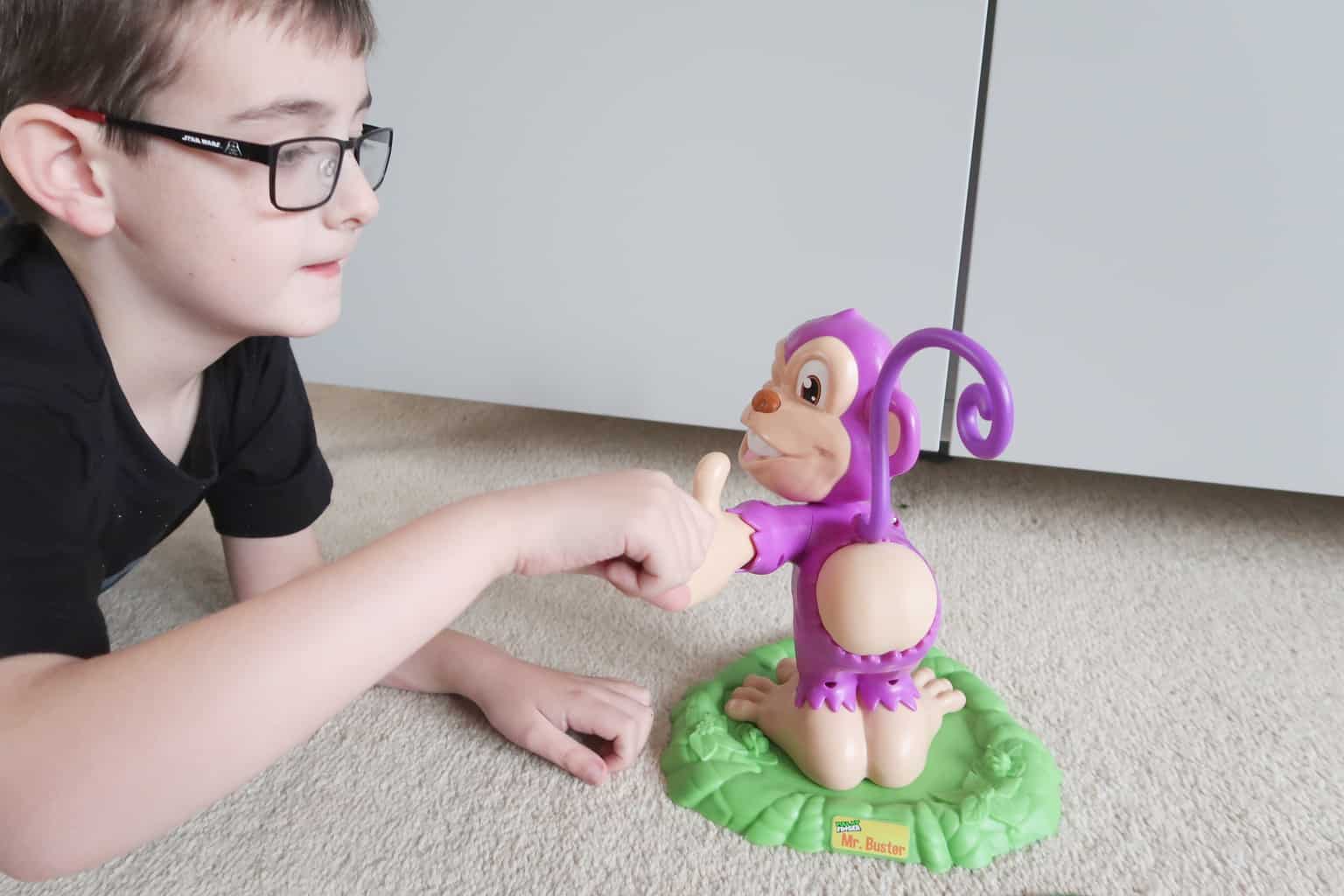 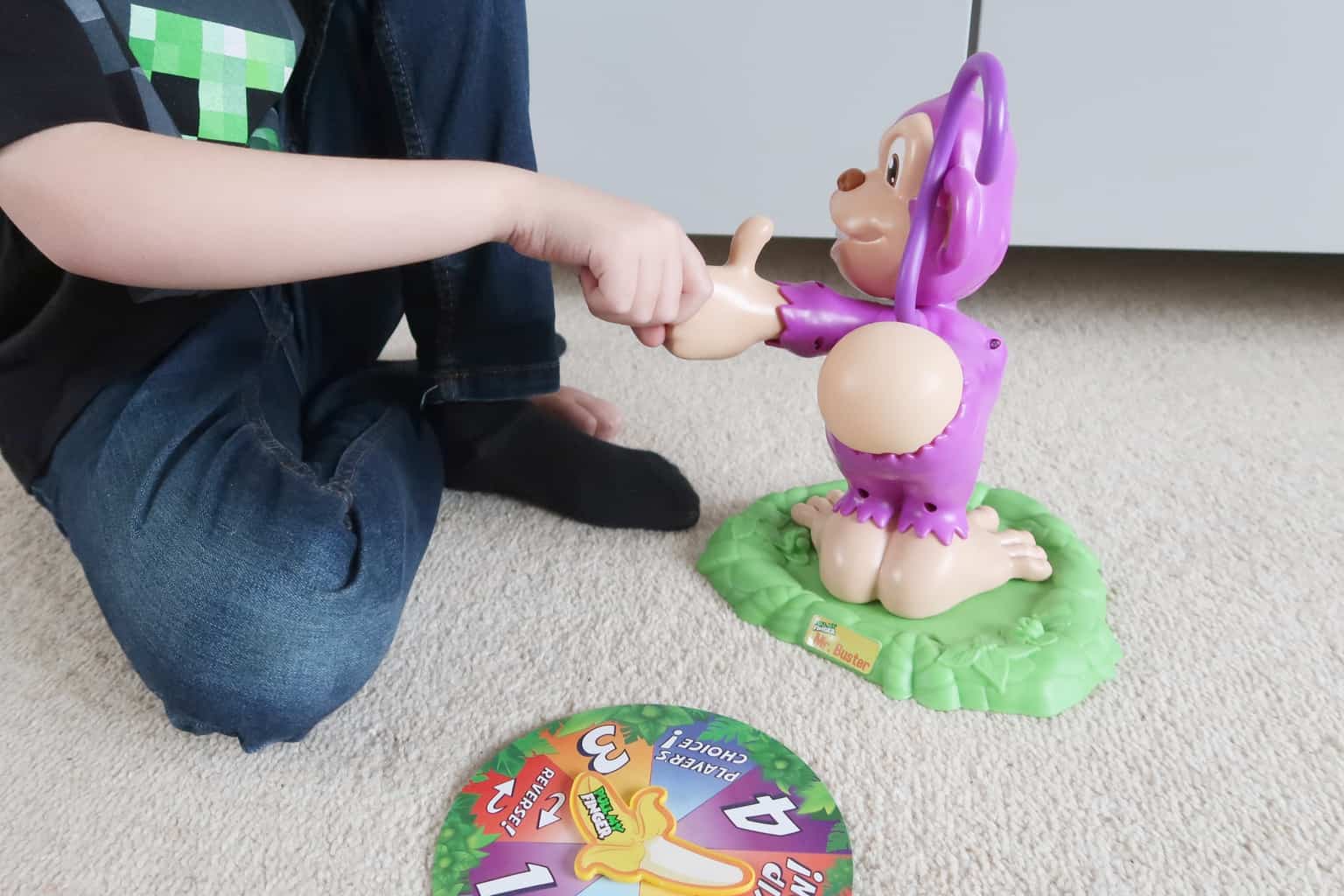 What can I say about this game?

It’s one that will get you laughing about butts inflating and the fart that follows!

Pull My Finger // Where Can I Buy?

The Pull My Finger game from Jakks Pacific is available to buy from Amazon and all other good toy retailers. 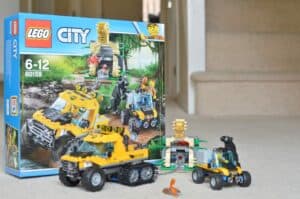 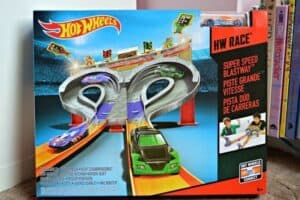 Dads Who Never Need to Grow Up

This website uses cookies to improve your experience while you navigate through the website. Out of these, the cookies that are categorized as necessary are stored on your browser as they are essential for the working of basic functionalities of the website. We also use third-party cookies that help us analyze and understand how you use this website. These cookies will be stored in your browser only with your consent. You also have the option to opt-out of these cookies. But opting out of some of these cookies may affect your browsing experience.
Necessary Always Enabled
Necessary cookies are absolutely essential for the website to function properly. These cookies ensure basic functionalities and security features of the website, anonymously.
Functional
Functional cookies help to perform certain functionalities like sharing the content of the website on social media platforms, collect feedbacks, and other third-party features.
Performance
Performance cookies are used to understand and analyze the key performance indexes of the website which helps in delivering a better user experience for the visitors.
Analytics
Analytical cookies are used to understand how visitors interact with the website. These cookies help provide information on metrics the number of visitors, bounce rate, traffic source, etc.
Advertisement
Advertisement cookies are used to provide visitors with relevant ads and marketing campaigns. These cookies track visitors across websites and collect information to provide customized ads.
Others
Other uncategorized cookies are those that are being analyzed and have not been classified into a category as yet.
SAVE & ACCEPT
31 shares