Popular preschool television programme ‘Boj’, which is regularly watched by over half a million viewers on CBeebies, will soon be offering its legion of fans another opportunity to enjoy the adventures of Boj and his friends in Giggly Park with the release of his first DVD, “Blast Off Buddies” released on Monday 18th May 2015. 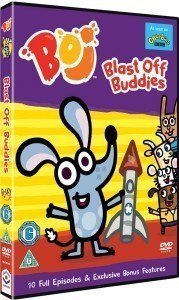 The DVD features 10 episodes of the hugely popular series including the title episode, ‘Blast Off Buddies’ where Boj tries to fix his friend Gavin’s broken toy rocket and fly it to the moon! The DVD offers many exclusive extras, with three sing-along karaoke songs and printable colouring in sheets to really get your little ones involved and fully entertained. And there’s one further unique feature – you can choose whether to watch the episodes in English or in French – C’est Boj-ifique!

Boj has burrowed to Giggly Park with his musical parents, Mimi and Pops (voiced by TV star Jason Donavan), where they live in their quirky underground burrow. The show is a celebration of childhood – full of creativity and messy fun. Each episode sees the central character Boj, who is a bilby – an endangered bandicoot originally from the Australian Outback – finding a solution to a dilemma or a situation with one of his totally inspired ‘Boj-a-boom ideas!’

Available to pre-order from Amazon for £7.25, and will be available from Sainsbury’s and Asda upon release.

To celebrate the release of Boj – Blast off Buddies DVD on Monday 18th May, Boo Roo and Tigger Too are lucky enough to have two copies of the new DVD to giveaway.

To enter simply answer the question below, then complete the Gleam widget below:

What type of animal is Boj?
A. Koala
B. Bilby
C. kangaroo

Disclosure: We have received no compensation for this post, just sharing the love (I’m nice like that)