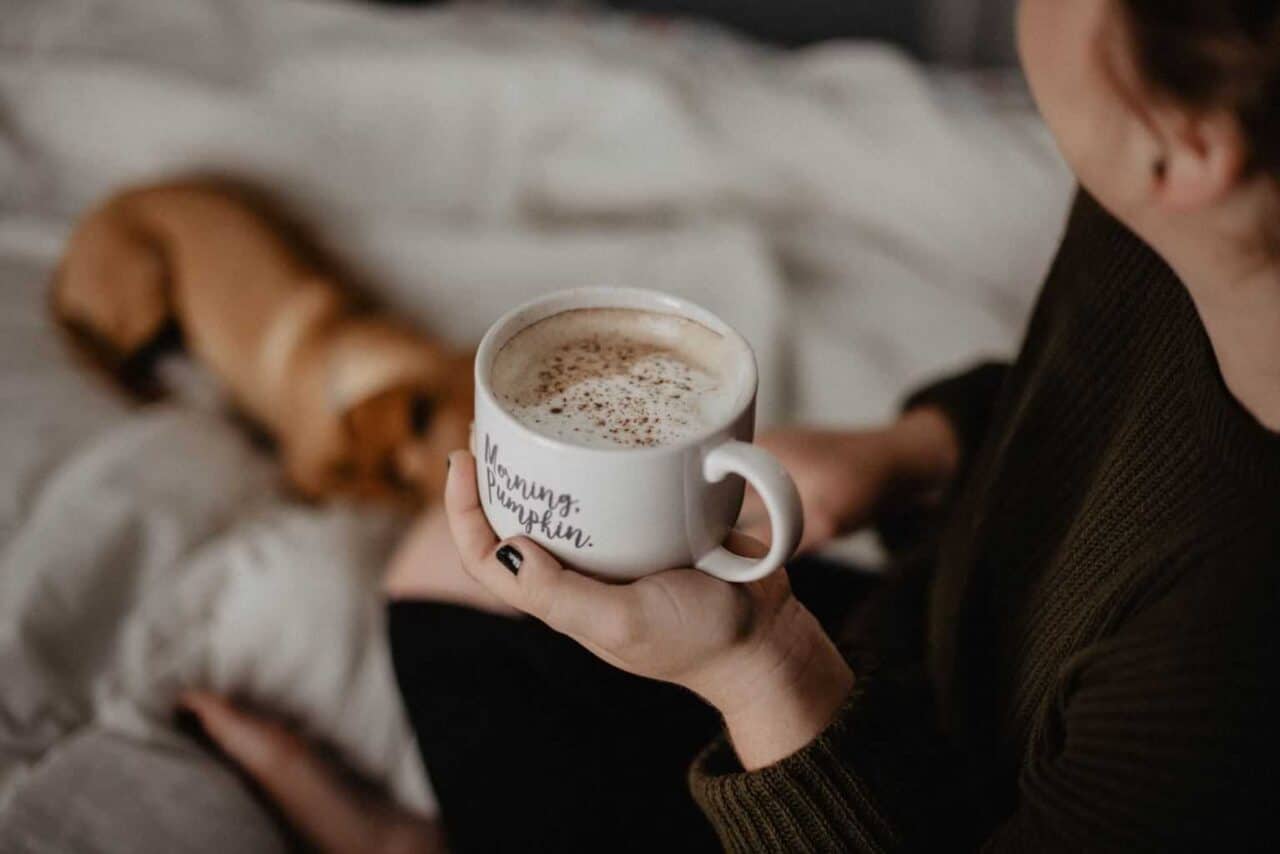 When it comes to welcoming a pet into our home, whether it is a cat or a dog you want it to feel at home. To feel like one of the family, so owners will often face a dilemma when it comes to ‘parenting’ their pet. One of the big debates is whether you should allow your pets in your bedroom or not?

A survey commissioned by leading pet insurer Animal Friends found that nearly half of owners sleep with their pets. So is it a good idea to welcome your pet into your bedroom? Bespoke kitchens in Glasgow DM Design has analysed the arguments both for and against this decision.

Should you allow your pets in your bedroom or not?

The case for pets being in the bedroom

A study carried out by the Mayo Sleep Clinic, a leading clinic based in Arizona, USA, supports the case for welcoming your pets into your bedroom.

After surveying 150 patients — 49 percent of whom owned at least one pet — the researchers found that over half of those with animals in their let them sleep either in their bedroom or on their bed.

However, the study also revealed that those who did felt safer, more secure, more relaxed and had a better night’s rest. On the other end of the scale, just 20 percent of those with pets said that they experienced interrupted sleep due to their pets ‘snoring’, ‘wandering’ or ‘whimpering’ when they were in the bedroom.

Lois Krahn, the author of the study, commented: ‘Many pet owners view companion animals as family members that they wish to incorporate into as many aspects of their life as possible. Because humans spend considerable time sleeping, a pet owner’s desire to have animals close at night is understandable.”

Dr. Krahn also pointed out from the study’s results that people who slept alone — whether due to being single or because their partner had to occasionally travel or work at night — “more often spoke of the beneficial companionship stemming from a pet in the bedroom or on the bed”.

This isn’t the only instance where research carried out at the Mayo Sleep Clinic has revealed results in favour of having pets in the bedroom.

In a study of 40 healthy adults who had their sleep evaluated with a dog in the bedroom over a five-month period — with both the humans and dogs wearing activity trackers for the research — it was established that people slept better when the pet was on their bed. However, sleep quality was sacrificed when people allowed their dogs to sleep under the covers with them.

In regard to this particular study, carried out by Mayo Clinic’s Centre for Sleep Medicine, Dr. Krahn acknowledged: “The relationship between people and their pets has changed over time, which is likely why many people, in fact, do sleep with their pets in the bedroom.

“Today, many pet owners are away from their pets for much of the day, so they want to maximize their time with them when they are home. Having them in the bedroom at night is an easy way to do that. And, now, pet owners can find comfort knowing it won’t negatively impact their sleep.”

The case against pets being in the bedroom

Although the Mayo Clinic has released studies in favour of having pets in the bedroom, the institute — or more specifically their Sleep Disorders Center — believes that people who have difficulty sleeping should consider keeping their pets out of the room.

With these results in mind, John Shepard, the medical director of the Mayo Clinic Sleep Disorders Center, advised: “Every patient has to weigh the advantages and disadvantages of sleeping with pets and make a personal decision about the sleeping arrangements in the household. Some people are very attached to their pets and will tolerate poorer sleep in order to be near them at night.”

Meanwhile, Derek Damin, of Kentuckiana Allergy, Asthma & Immunology in Louisville, USA, believes that people who have asthma or obviously pet allergies should refrain from letting their animals on their bed or even in the bedroom. This is “to give your nose a few hours a day to recover”, Dr. Damin explained.

However, he was keen to add: “But if you’re not allergic, there’s really no big issue with having a dog in the bed. It’s fine as long as it doesn’t disturb your sleep.”

It appears then that so long as there aren’t any issues with allergies, personal preference takes precedence when deciding whether or not to allow pets into the bedroom. 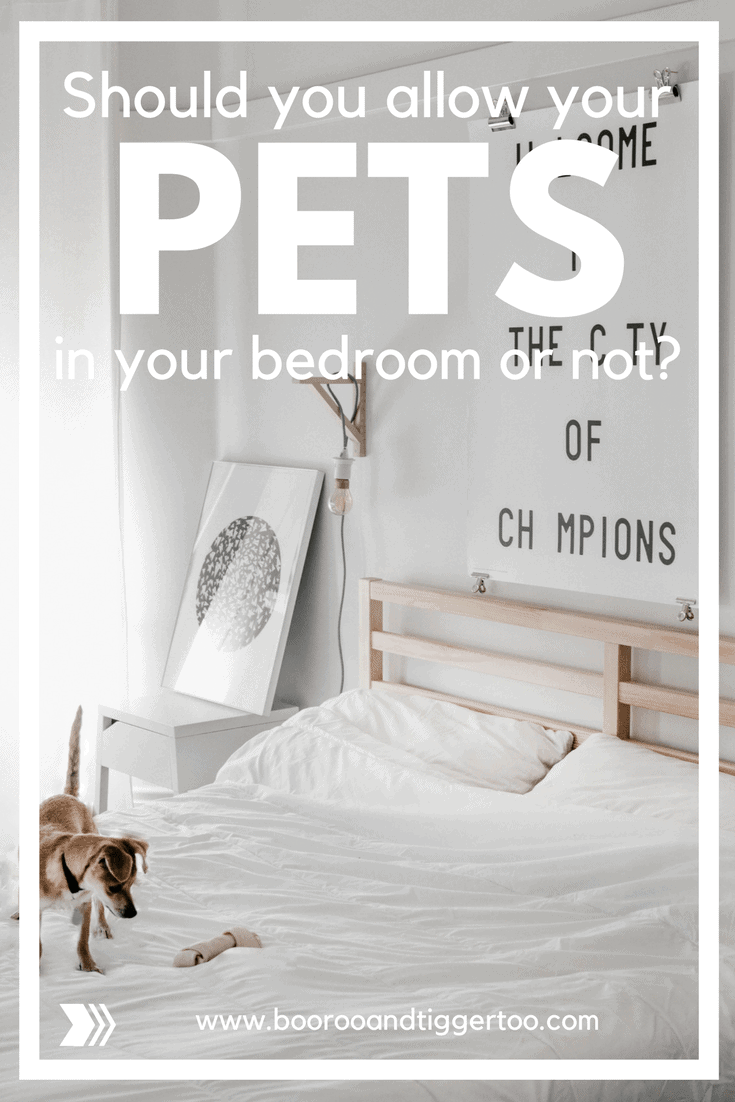 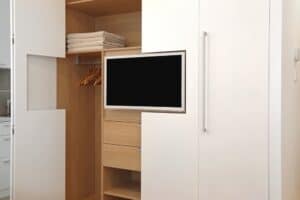 Struggling for storage? Why you need to consider built-in wardrobes 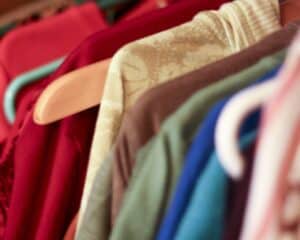 Customizing Your Closet to Fit Your Wardrobe

Who or what do you share your bed with?