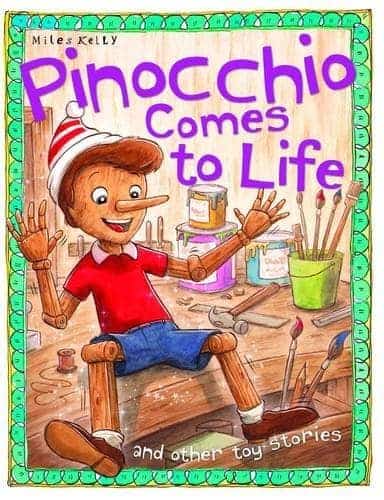 With bright, colourful covers featuring cherished characters, on pearlised paper. Entertaining stories encourage both avid readers and reluctant readers to enjoy the tales. Each story is sympathetically retold for the age group, making the text clear and easy to understand. Delightful illustrations by a selection of talented artists. Extra illustrations throughout bring the pages to life.

An extract from The Magic City by E Nesbit.

Philip lives with his sister Helen, who has just married a man with a daughter of his own, called Lucy. While Helen is on her honeymoon, Philip has been left alone in the man’s large house with the servants. The room he likes best is the nursery. 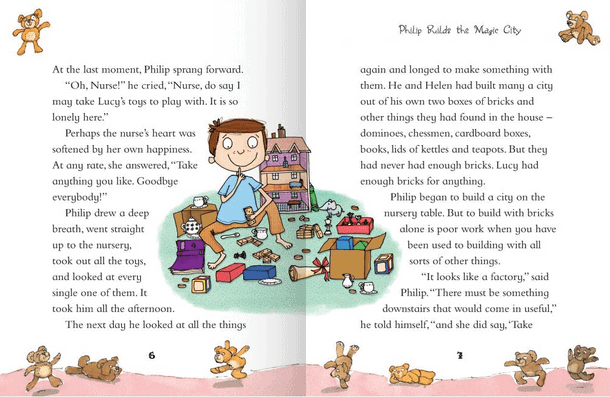 An extract from Pinocchio by Carlo Collodi.

A poor, old man called Geppetto has decided to carve a puppet. He has brought home a lump of wood to make a start. 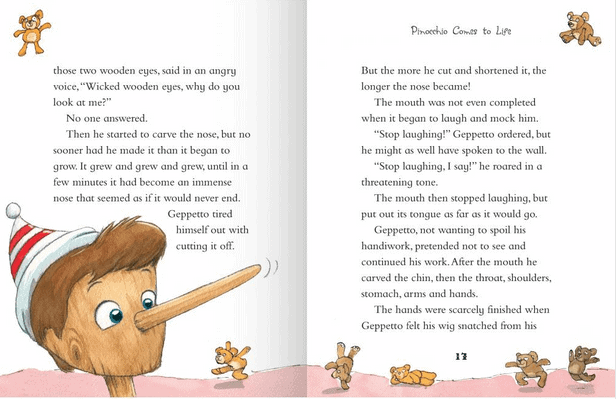 An extract from The Peterkin Papers by Lucretia Hale.

Jedidiah and is family live in the small town of Spinville. A bandbox was a smart box for keeping hats in.

An extract from The Racketty-Packetty House by Frances Hodgson Burnett.

Tjis is a Victorian story about a doll’s house. In those days, rich people had a servant to look after the children, and the children’s room was called a nursery.

Tig Thomas has worked as an editor for more than 25 years. She specializes in children’s period fiction and says one of the greatest pleasures of her job is to bring wonderful storytellers of a previous age to today’s readers. She has four sons and lives in a village in Suffolk in a house stuffed with books.

The first thing that grabs you as you pick up this book is the beautiful pearlised paper cover, with highlighted detailing to Pinocchio and lettering. The book contains four charming extracts from some classical tales which gives the reader an insight into the story which they can then choose to find the original and read in full or simply move on to the next short story.

Priced with a RRP of £5.99 it represents good value for money and it the first book in a series of ten available, so why not catch up with the other characters in the next books.

Available direct from Miles Kelly, Amazon and all other good book retailers.

Disclosure: We received a copy of Pinocchio comes to life and other toy stories FOC for the purpose of review. 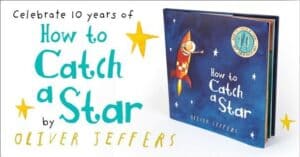 How to Catch a Star 10th Anniversary Edition