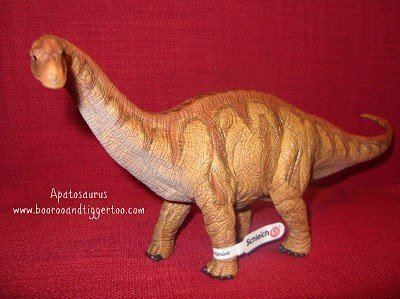 With the news that Jurassic Park is set to be released in eyepopping 3D and brand new species being discovered, dinosaurs are the hottest prehistoric playmates of the summer. Children and dinosaur fans can now also unearth their own pack, as the fiercest Jurassic inhabitants come to life with Schleich’s new Dinosaur collection!

Almost 225 million years after the first dinosaurs roamed the Earth, Schleich has recreated the most iconic prehistoric predators and released them into the wild ready to delight dinosaur-fans. An ever popular boys’ toy, these anatomically correct models take dino fun to a whole new terrifying level! Whilst small enough for children’s hands, the intricate details ensure that these beasts remain ferocious.

Kids can create their own prehistoric worlds, choosing from a whole pack of hand painted dinos. The new stars of the carnivorous collection include Allosaurus, a very dangerous dinosaur indeed, the towering Giganotosaurus and the absolutely infamous Tyrannosaurus rex! Each fearsome predator features the powerful moveable jaw and existing favourites have also been refreshed with this awesome jaw. The dino pack is getting ready to pounce!

But don’t worry; there are some friendlier faces in Schleich’s Dinosaur collection. As a herbivore, the Brachiosaurus sticks to munching on plants but, at 80 tonnes, is still a formidable creature and weighs as much as 16 elephants!
With so many figures to choose from, Schleich has a prehistoric playmate for everyone!