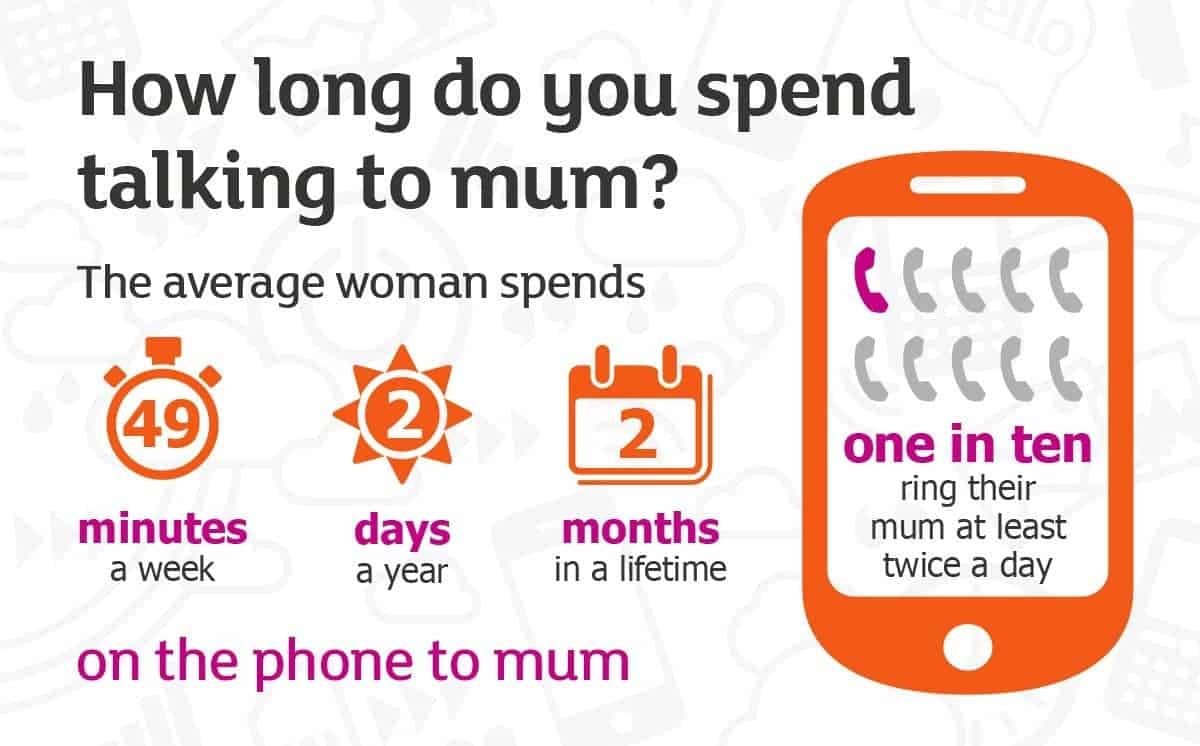 The average woman will spend the equivalent of two months of her life chatting on the phone – to her mum, a study by Sainsburys Mobile revealed yesterday. Researchers found that women make an average of three calls a week to their mum, with each conversation lasting just over 16 minutes.

Incredibly, more than one in ten ring their mum at least once a day, while another 13 per cent admit their conversations usually last at least half an hour each time they pick up the phone. But poor old dad is treated to just one phone call a week, lasting less than seven minutes a time.

The study of 2,000 women found that in an average week, they will speak to a friend, relative or work colleague on the phone 14 times, with each of those conversations lasting almost 15 minutes each. And the majority of that time is spent on the phone to their mum, with three calls a week lasting a total of almost 49 minutes.

A further 28 minutes each week is taken up with three calls to their best friend, while almost 25 minutes is spent talking to their husband or partner during two separate phone calls.

One weekly call of almost nine minutes is made to their sister, with another seven minutes spent on the phone to their dad. Women also make another four calls a week to their brother, work colleague, children and grandparents lasting between four and five minutes each.

Researchers also found that more than six in ten women reckon they spend more time on the phone to their mum than anyone else. And family issues are the most popular subject, closely followed by their children, work and health issues. Women also phone their mum to chat about their siblings, what’s on TV, money, shopping, friends and the latest gossip from work.

It also emerged that two thirds of women say their mum is the first person they call when they need help or advice. And almost three quarters call their mum before anyone else when they have good or bad news. But 80 per cent often just phone their mum for a catch-up with one in ten doing this every day. And one in five have a set time or day that they talk to their mum on the phone.

Six in ten women even admit there are occasions where they call their mum and end up talking for a long time, despite having seen them face-to-face only hours earlier.

How long do you spend talking to Mum?

Disclosure: This post is brought to you by Sainsburys Mobile

Reasons to be Cheerful

Things to do before I’m forty?

Conversations with a 5 year old – Grown Up Birthday Party