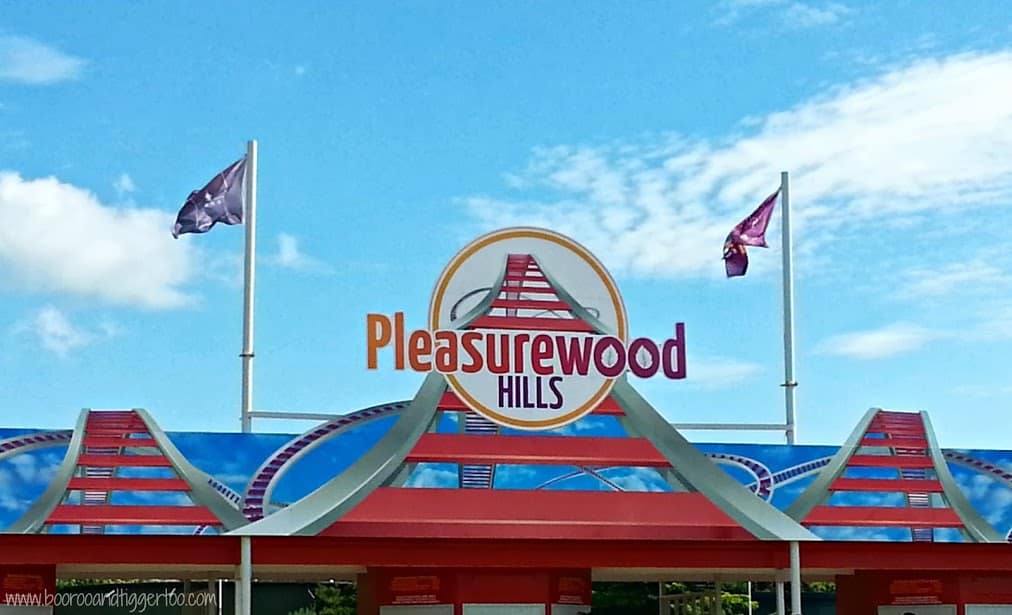 Pleasurewood Hills is celebrating 30 years of family fun this year and in honour of this they invited the Boo Roo and Tigger Too household along with our niece Charlie to enjoy a day of fun at their theme park in Lowestoft, Suffolk.
The 2013 seasons brings 4 new awesome rides, HoBs PiT, Pleasurewood Pedalo’s (these are making a grand return), Moby Dick, and Woody’s Tea Cups. Alongside the new rides they also have a new show in their Castle Theatre, Sean Alexander, The Confusionist from Britain’s Got Talent fame.

Like most theme parks by purchasing your tickets online can help you save some much need £££’s. You may not think a £1.00 per person is much but when you think that the average family has two children then by purchasing a Group of 4 ticket you are saving £4.50 enough to buy you all an ice cream.

Upon entering the park you are greeted with a large graveled areas which I assume is used for displays and shows though the year, however there was nothing planned in this area during our visit. Handing Roo the map she decided that we should head right to The Jolly Roger.

The Jolly Roger – With a minimum height requirement of 1.4m Roo was bitterly disappointed not to be tall enough to be able to ride. It didn’t help matters when Mr Boo explained that even next year she might not be tall enough either. She had to make do with watching Daddy having a ride, after pulling the chairs high in the air it shoots them back down to earth at a rate of knots. Mr Boo enjoyed this ride and said it went that fast he couldn’t breathe… not sure if I would find that a good point but he liked it.

Engima – The two girls decided to they wanted to go on this ride so as it was a rollercoaster I thought it best that I went along too as I wasn’t sure that Roo would get on without an adult. After looking at the ride signage it did however state that children between 1m-1.25m had to be accompanied it didn’t state an adult but after seeing smaller children being able to ride with an older child I needed have worried about her needing me tagging along. In the end I was needed but not by Roo but by another family who had three children under 1.25m and obviously only two adults so I said I would sit with one of their little ones (we have all been there so was pleased that I could help out).
As the queue for Enigma was quite long Mr Boo took Tigger over to the play area situation next to the The Jolly Roger and Enigma. It does seem a funny place to have the play area, it was lovely that it was nice and quite but it does feel a little tucked away. 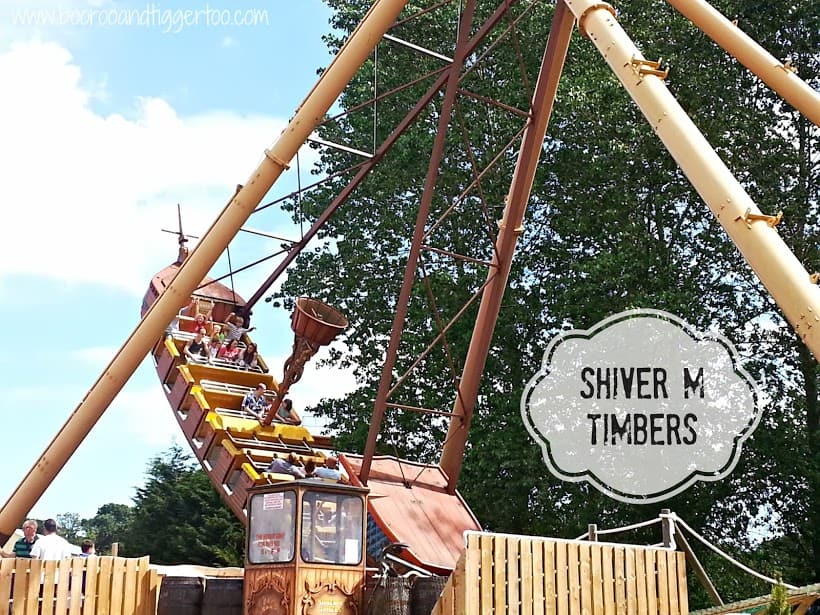 Shiver M Timbers – Roo loves pirate ships, I on the other hand do not so it was Mr Boo’s turn to step up and have a go as she needed to be accompanied by an adult. Tigger loved watching the ship swaying higher and higher whilst trying to spot Daddy and Roo.
Moby Dick – A new addition to Pleasurewood Hills this year and I do question whether they have got the height restrictions correct for this ride. Children under 1.3m have to be accompanied by an adult, however the ride itself is sitting in a whale going round and round in a circle bobbing up and down. The reason I question it is due to the fact that children under 1.25m can ride accompanied on rollercoasters i.e. Enigma without it being an adult. (I did raise this question with Pleasurewood Hills and they are following the manufacturers guidelines for the height restriction) 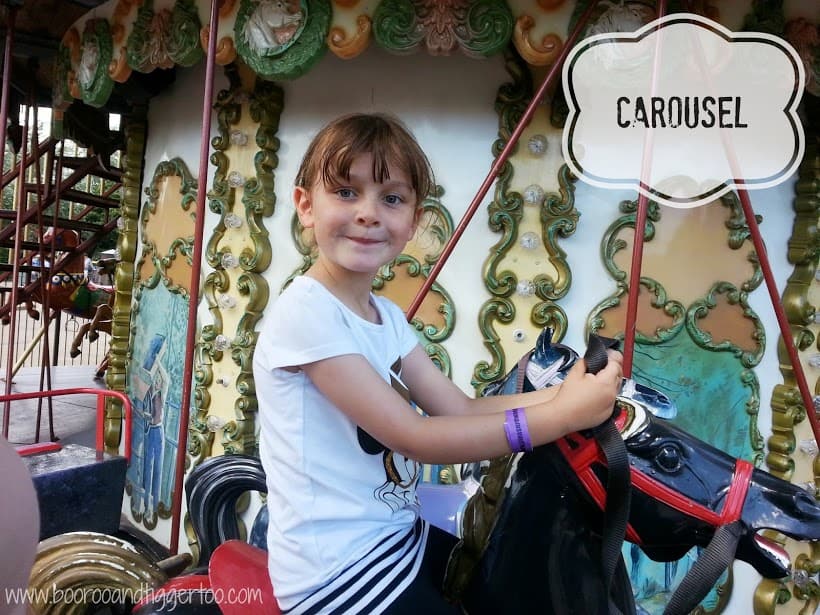 Carousel – I don’t think a theme park would be complete without a carousel. One of the few rides that Tigger was happy to go on. So whilst Roo rode a horse, Mummy and Tigger enjoyed sitting inside a giant shell watching the world go by around us. 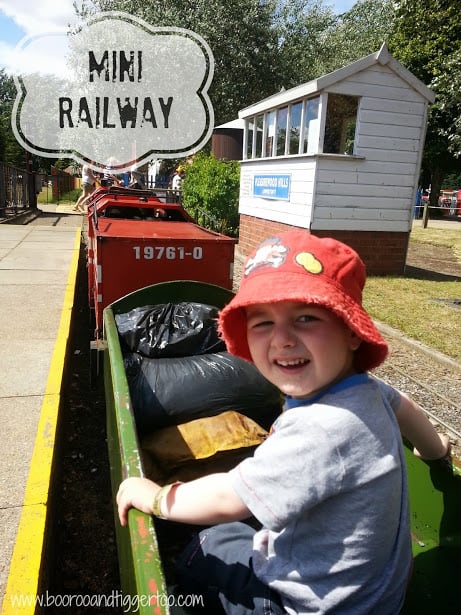 Mini Railway – There are two train rides available on the park, the mini railway was the first ride that Tigger really got excited about. Taking us on a journey around the park, through the woods and under some tunnels Tigger really enjoyed it (so much so that he cried when we came off). This soon became a firm favourite and I think Tigger would have sat on there all day if he was allowed. 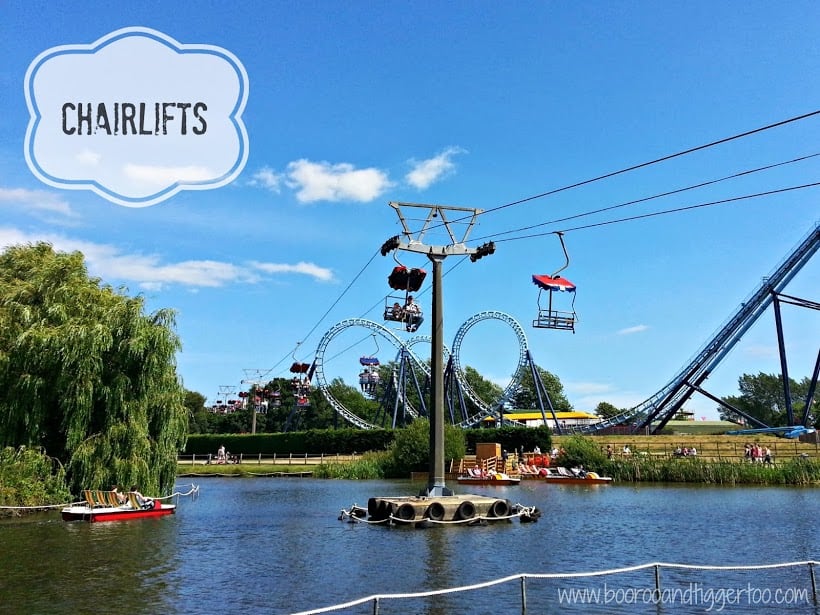 Chairlifts – Not being a fan of heights (that’s the true reason why I am so short, that’s my excuse and I’m sticking to it) this was a Mr Boo ride. This allowed myself and Tigger to take a stroll through the park and enjoy the view from the waters edge. 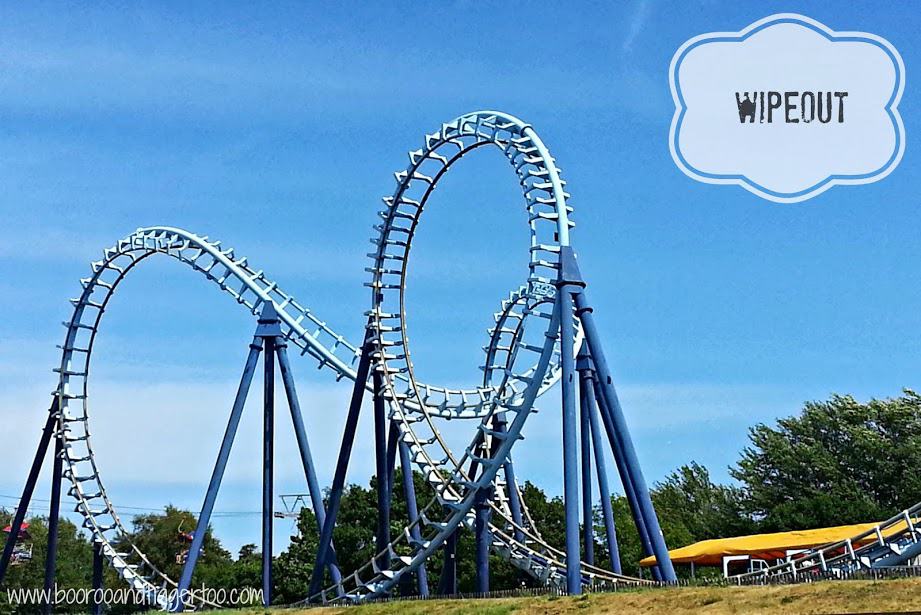 Wipeout – One of Pleasurewood Hills newest rides, just looking at it made me feel nauseous it. Watching it whizzing along at 50mph was good enough for us so felt we didn’t need to experience it first hand. 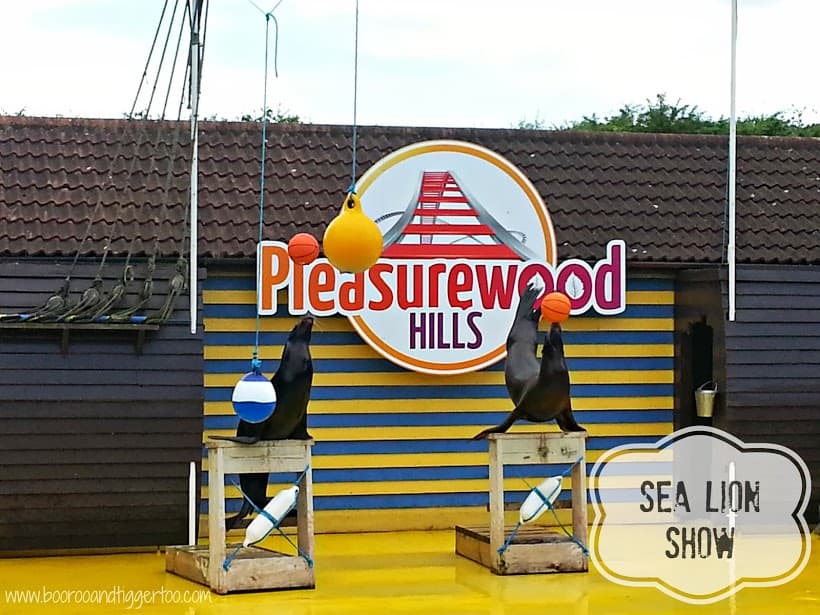 Sea Lion Show – Whilst Roo and Mr Boo were enjoying the delights of Timber Falls, I opted to take Tigger to see the Sea Lion Show. We were not disappointed, watching Claude and George preform a variety of tricks was really entertaining. 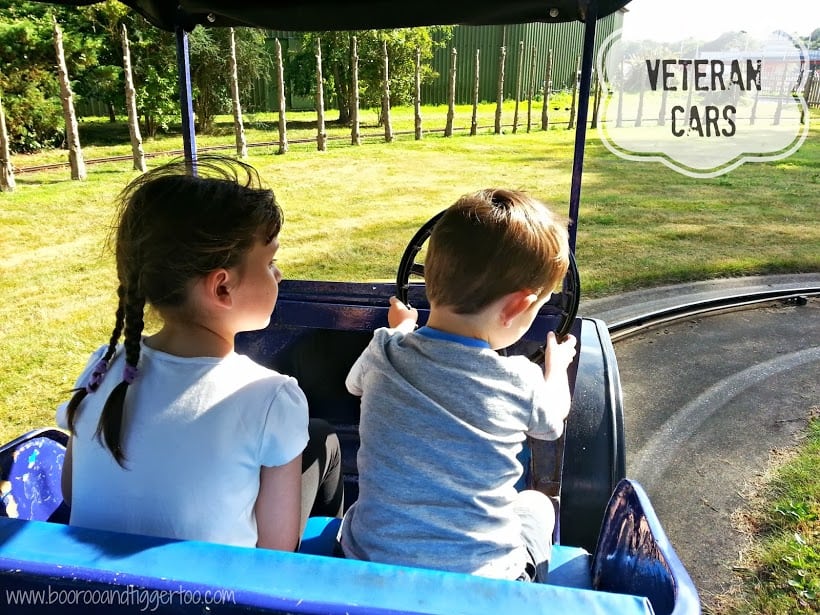 Veteran Cars – I was pleased to see that they had kept an old favourite, the Veteran Cars from when I used to visit as a child. Tigger insisted on being the driver so poor Roo was a little put out but after explaining that he hadn’t been on many rides it was only fair to let him drive she was OK.

As well as the above mentioned rides there are a number of other rides that we enjoyed, more details on ride available can be found here.

There are toilets and baby changing facilities dotted around the park and like most well used facilities they are a little worn. As the old single toilet cubicles were too small they have turned two cubicles into one which had they decided to keep both toilets in there would have been ideal for families instead it just makes the queue that bit longer.

I felt that signage around the park could be improved, both with ride signage making a spotting ride names from a distance easier and inviting. Although personally with no sign posts pointing to the direction to toilets, gift shops, food outlets and rides you did have to rely on your map reading skills to navigate around the park. (Pleasurewood Hills are planning on upgrading and improving the current signage issues for the 2014 season)

We opted to take a picnic with us to the park and found ample picnic tables around the kiddies zone. With plenty of bins and a cafe close by it was nice to be able to sit down and enjoy some food for half an hour.

We did pass a couple of food places with a large drink, burger an fries costing £6.00 which is about what you would expect to pay. 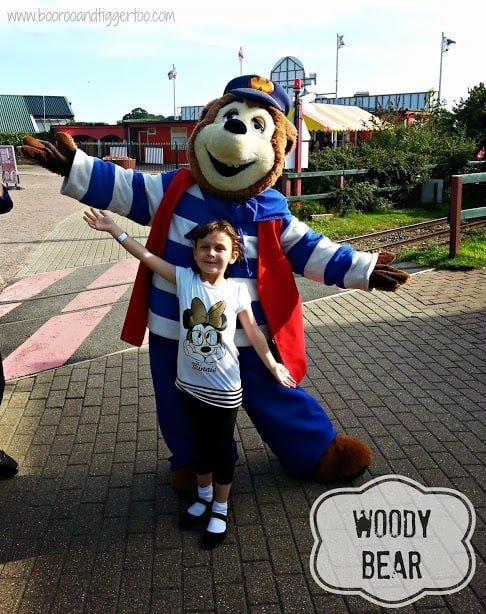