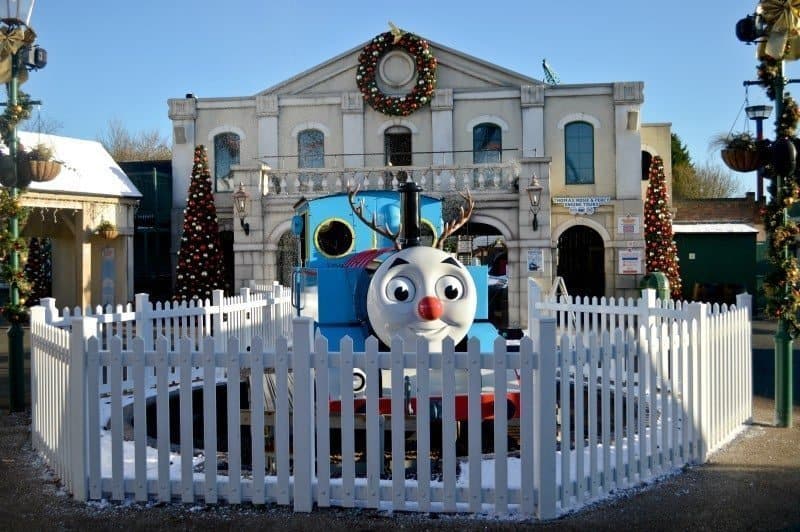 With Mr. Boo having to work, I bravely packed up the children into the car and made the drive across to Drayton Manor. As we were heading for a Magical Christmas day out it seemed only fitting that we listened to Christmas songs in the car.

Arriving bright and early we were one of the first in the park and were able to take in the full beauty of all the decoration that had taken over Thomas Land. Heading through the archway into Thomas Land we were greeted by a Rudolph Thomas, who looked marvellous with his red nose and antlers.

If there is one thing that Drayton Manor do well it is the attention to detail when it comes to dressing up the park for an event. We thought that Halloween looked amazing, but that is nothing compared to the Drayton Manor Magical Christmas. With garlands strung on lampposts, fairy lights hung around buildings and rides, ‘snow’ dusted around the rooftops and along the tracks. 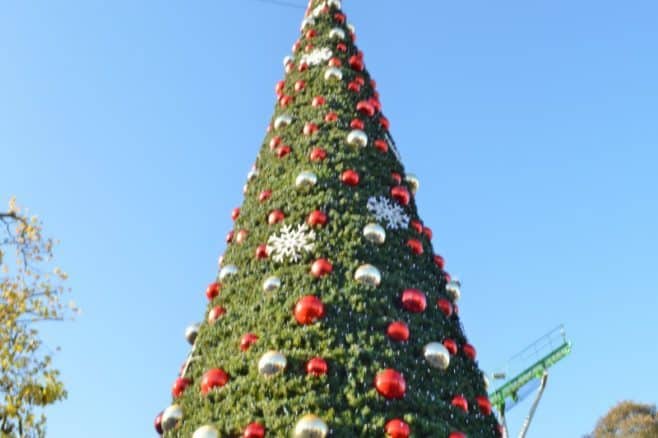 One of the reasons we arrived bright and early was to catch a special Father Christmas Express. With Percy taking us on the journey from Knapford Station across to Tidmouth Hault. Where Father Christmas was waiting for us on the platform. The children thought this was wonderful and Father Christmas happily greeted each of the children and gave them a letter to complete and post later in the day. The Letter to Santa is available from the gift shop, priced at £2.50 which includes a reply sent to your home address (very worthwhile completing). 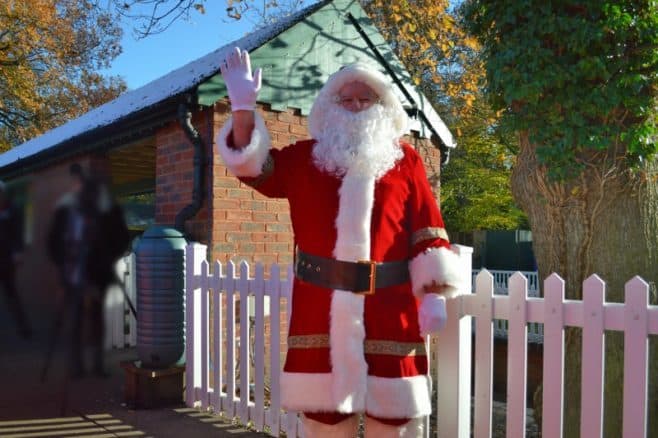 After spending some time with Father Christmas we were able to head over to see the Reindeer. Something that we always like to do whenever we visit Drayton Manor, especially as we have always told the children that this is where Father Christmas stables them during the year. We were lucky enough to see the reindeer be fed and two of the zoo keepers were able to tell the children all about the reindeer. With lots of great questions being asked by the children. 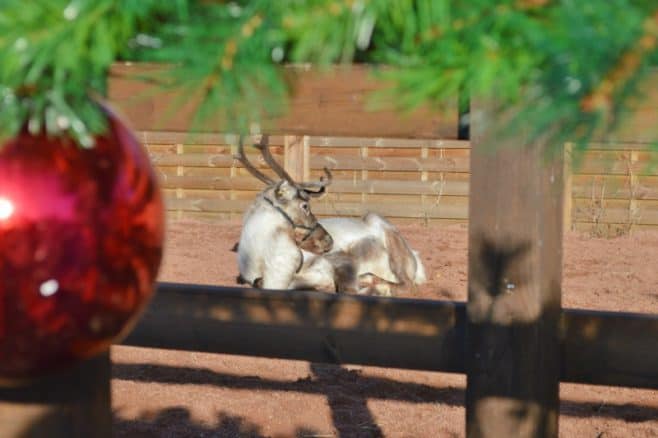 Christmas is a time for giving and the animals within the Drayton Manor zoo aren’t going to be left out. During a craft session in the Carton Network Cafe, Roo and Tigger were shown how to make several animal gift crafts for the different animals within the zoo. Roo especially proud of her hanging bauble that the meerkats were going to be treated to later in the day. It was filled with warm sweet potato and a special sticky protein mix (which looked like carnation milk that you make fudge with). 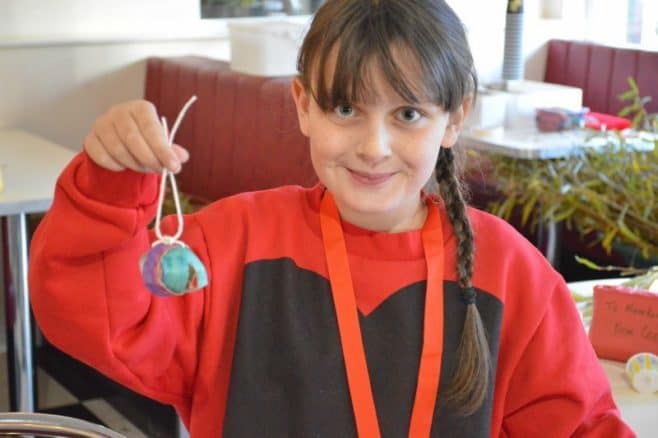 The Polar Express has to be one of our favourite Christmas films as a family. So when we saw that it was the feature film within the Drayton Manor 4D cinema we knew that we had to make one of the viewings. The 15-minute experience was run at 30-minute intervals throughout the day so it was easy enough to catch one of the viewings. And it is highly recommended, the magic of the film is captured in the 15 minutes and the 4D effects just add to the experience. 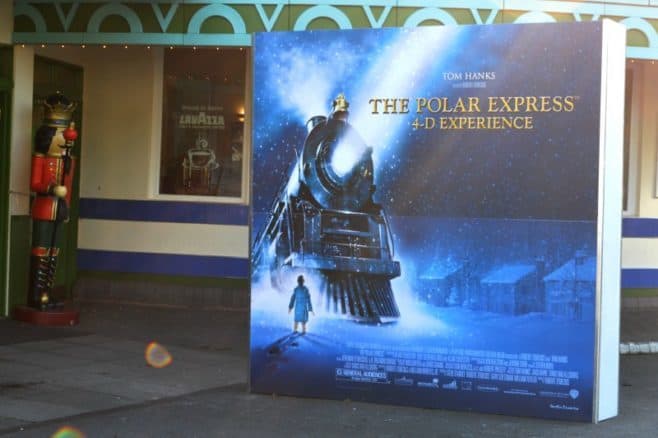 As we walked over to join the queue for another ride, we happened to see that the Slide & Glide rink had been set up within the dodgems ride. With the bumper cars all put-away and made way for a slide and glide rink where you are able to spend 15 minutes enjoying the fun and falls that come with ice skating. Now Roo is like Bambi on the ice when it comes to normal skating so I was hesitant about letting her loose on the slide & glide rink. With Tigger and Piglet watching from the side I opted to join her just in case she needed a steady hand. Actually, she was quite confident, only slipping on to her bottom once.

If we are all honest, the main reason to visit Drayton Manor Magical Christmas is to see Father Christmas and tell him exactly what we’d like to find under the Christmas tree this year. In pre-booked slots, you are able to enter the Castle of Dreams. Taking a walk along the waters edge you are asked to wait in two queues before the door opens in front of you and you are shown in to see Father Christmas. 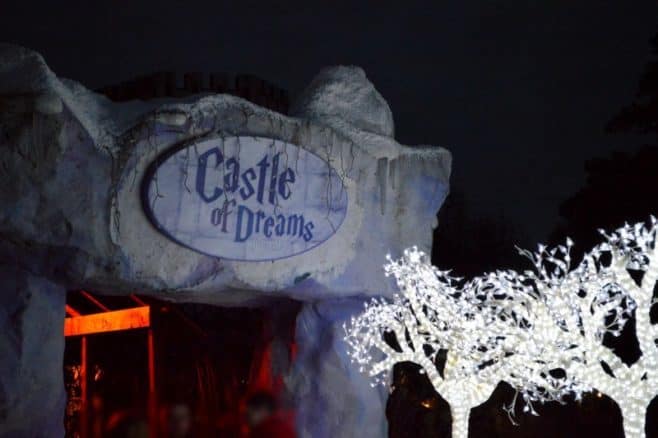 With the children knowing exactly what they were asking for this year they chatted to a cheerful Father Christmas who asked questions about their choices. He even made time to ask me what I’d like to find under the Christmas tree this year (a purple handbag will do nicely, thank you Santa). With a gift bag given to each of the children, we were able to pose for a photo with Father Christmas before we left and made our way into the main Castle.

Arriving you were greeted by the photo kiosk where you were able to purchase the photo that you’d had taken with Father Christmas. There were several different packages available at various costs. From here you then were free to enjoy the rest of the Castle of Dreams.

Which included displays from the knights and dragon that live within the castle during the year. Archery and hopscotch games were available for the children to play as well as the option of having their faces painted. With a Christmas themed gift shop also available you were able to purchase personalised baubles and treats before leaving back into the park. 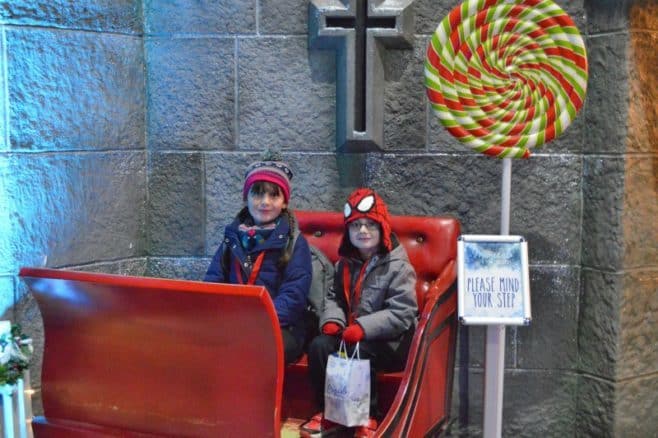 During the Drayton Manor Magical Christmas dates the main park and thrill rides will not be available. Please take a look at the rides available during these dates:

What a magical day! The children had an amazing time and weren’t bothered that the main park wasn’t open. With plenty to keep them occupied all day with the rides within Thomas Land, Christmas themed shows, the Drayton Manor zoo and of course, the Castle of Dreams.

Any trip to Drayton Manor wouldn’t be complete without meeting the Fat Controller and both Roo and Tigger were happy to get their photo with him just before the parade. Sadly, we left before the parade started as it had been a long day for Piglet. 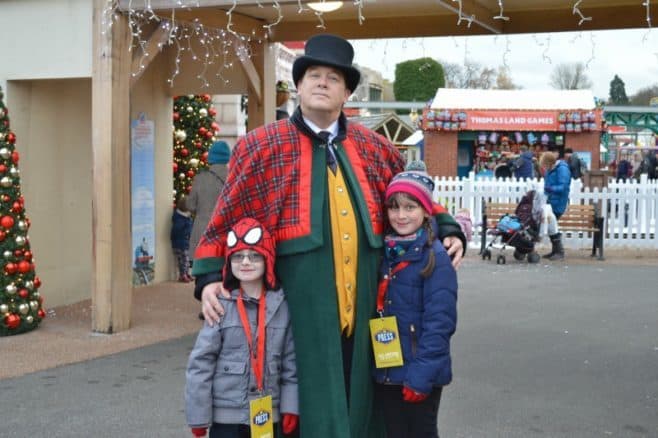 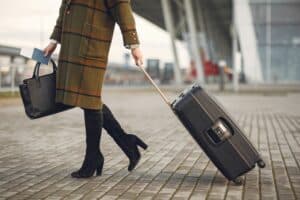 How to Plan Your Long Business Trip 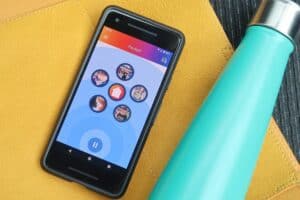