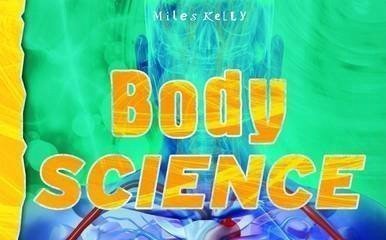 [box] Bursting with astounding facts and striking photographs, the new ‘Explore Your World’ series concentrates on only the most amazing content, from recording-breaking vehicles to the deadliest predators. 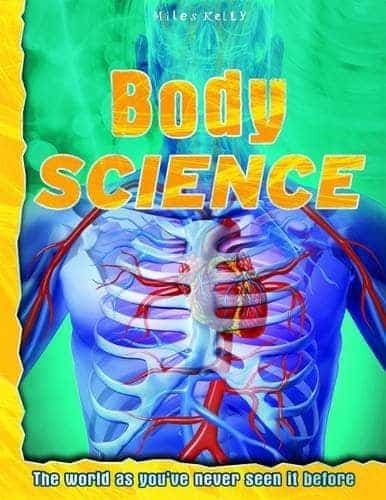 Take a top-to-toe tour of the incredible human anatomy, with this Discovery Explore Your World: Body Science book. This fact filled book is broken down into 17 sections covering the body from the brain to our skin.

The body is made up of 12 different, interlinking systems – each one performs a particular task, but they are all dependent on each other. Some, such as the circulatory system, spread throughout the body. Others, such as the digestive system, are mainly in one place.

Powerful microscopes have revealed that surface of the body to be surprisingly varied. Close-up, skin looks like rough terrain and hair grows on it like a forest. The skin is such an important organ that it receives more than one third of the body’s blood supply.

The body is made up of 100 trillion microscopic parcels called cells. They come in many shapes and sizes as soft cases of chemicals, each  with its own personal set of life instructions in the form of DNA.

The body is made from a mixture of water and organic chemicals, and contains more than half the known chemical elements in the Universe. Every part of the body is involved in changing one chemical to another.

Blood is the body’s multitasking transport system.It not only delivers oxygen from the lungs to every cells, it also carries food to fuel and maintain the cells, and washes away waste to the liver, kidneys, and lungs for disposal. Blood rushes immune cells into action to guard against infection, and even helps to spread body heat.

The body cannot survive for long without the continuous input of energy from food. Energy drives all the body’s warmth and muscle energy for movement.

The brain contains more than 100 billion nerve cells, or neurons. Each neuron is connected to as many as 25,000 other neurons – creating trillions of routes for signals to buzz around the body. This enables us to think and learn, jump and sit, and laugh and cry – everything that makes us human.

Nerves make up the body’s communication network. They carry instant messages from the brain to every part of the body – and stream back a constant flow of data to tell the brain what’s going on both inside the body and in the outside world.

Your awesome eyes combine he picture quality of the best digital cameras with a versatility that no camera can match, they can focus both on a speck of dust inches away and a galaxy far across the universe, and work in both starlight and sunlight.

The human body can create a new version of itself. It starts when two single, microscopically tiny cells – a male’s sperm cell and a female’s egg cell – join. From this combined cell a new life begins, as a baby slowly grows inside the female’s womb for the nine months of pregnancy.

The rate at which the body grows depends on age and gender – babies and teenagers grow rapidly, and males become taller than females. Body proportions also develop with age – a baby’s legs only make up one quarter of it’s length, but by adulthood the legs equal half of the body’s height.

Every move the body makes need muscles, from lifting a finger to jumping in the air – even for sitting still. Without muscles, the body would slump like a sack of potatoes. Muscles are amazing little motors that work instantly, whenever they are neededm by constantly contracting and relaxing.

Bones give the body a strong, rigid, light framework. Bone can stand being squeezed twice as much as granite and stretched four times as much as concrete. Yet it’s so light that bone accounts for barely 14 per cent of the body’s weight.

You might think you’re clan, but you’re actually a zoo of microscopic bugs. Living inside your guts are up to 1,000 different species of bacteria – and a similar number are encamped on your skin. Then there are fungi and viruses, mosquitoes, fleas, bedbugs, blackflies, botflies, lice, leeches, ticks, mites and worms…

The body often comes under attack from disease-causing bacteria, viruses and other germs. To defend against these onslaughts, the body is armed with an amazing series of bilogical weapons, known as… the immune system.

The body is remarkably good at shielding itself against harm and repairing any damage. Sometimes, though, it needs medical help. Vaccines are the body’s immune system against future infections, antibiotic drugs kill many disease-causing bacteria, and surgery corrects defects.

How does the body know when to grow and by how much? How does it cope with stress? How does it keep thousands of substances in the right balance? The complex task of controlling the body is managed by an extraordinary system of chemicals called hormones.

Can you believe you get all that information plus much more for just a RRP of £3.99, a true bargain I’m sure you’ll agree. Available direct from Miles Kelly, Amazon and all other good book retailers.

Disclosure: We received a copy of Discovery Explore Your World: Body Science FOC for the purpose of review.